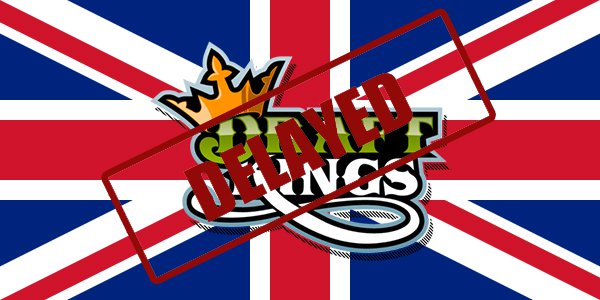 The DraftKings UK launch has been pushed back an unknown amount of time for undisclosed reasons.

In UK gambling news, the launch of popular daily fantasy sports (DFS) operator DraftKings in the United Kingdom has been pushed back until “early next year”, with no specific date set. As GamingZion had previously reported, both DraftKings and fellow DFS operator FanDuel had applied for and received sports gambling licenses in the UK, and were set to go live before the end of 2015.

DraftKings spokesperson Pippa Hancock had announced last Friday that the company would be delaying the launch until early 2016, though did not give any reasons behind the sudden setback. However, a company executive was recently quoted by the Boston Globe as saying that the DraftKings UK launch would go through once some “minor issues are resolved”.

UPDATE: The source of the Boston Globe quote was identifed as Jeffrey Haas, DraftKings’ Chief Global Officer. The full quote was provided to GamingZion by Edelman as follows: “Our fans and focus groups have provided us with very constructive feedback on our UK product and like us, are very excited about the launch of DraftKings. However, we think we can do better and are continuing to make refinements prior to a full launch. Once these minor issues are resolved we will be ready to go live — there is nothing else standing in our way.”

Was the planned DraftKings UK launch affected by DFS controversy in the US?

In spite of assurances from DraftKings, many suspect that the DFS UK launch delay is being caused by the ever-growing controversy that is growing around the fantasy sports league in the US. Since a scandal broke out in the summer—in which a DraftKings employee allegedly won a massive prize in a FanDuel contest—both companies have been under fire, with many states labeling them as forms of illegal internet betting and fighting to ban their operations.

Even if DraftKings and FanDuel are ruled as sports gambling in the US, they would still be able to go live in the UK because sports betting is legal and regulated in the country and both companies have been granted the necessary licenses. This leads many to the conclusion that DraftKings and FanDuel wish to stabilize their companies’ situations in the US prior to launching operations in a new region.