Espanyol to be Defeated by Atleti on Week 17 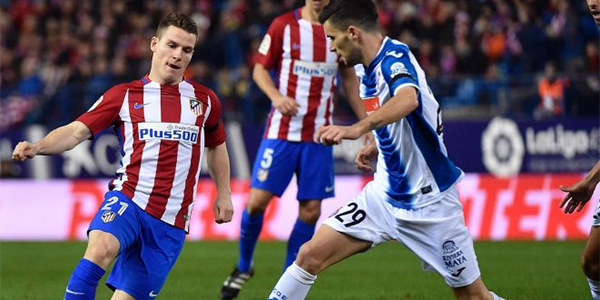 As we approach the last week of Spanish La Liga in the year of 2017, Espanyol are facing their worst fears of slipping further down the line, as they get ready to host the unbeaten team Atletico Madrid on Dec 22. Should we expect Espanyol to be defeated by Atleti on week 17?

Espanyol fell into an unexpected draw with the bottom club Las Palmas last weekend, going down to place 16 with 17 points, and getting closer to the trouble relegation zone. Online sportsbooks in Spain expect Espanyol to be defeated by Atleti on week 17, similarly as they were crushed early this season by the rest of La Liga giants including 0-5 defeated by Barcelona, 0-2 by Real Madrid, and 0-2 by Valencia.

Diego Simeone’s men have been progressing lately in La Liga, staying in touch with the leaders Barcelona. They jumped into the 2nd place with 36 points taking the advantage of Valencia’s 2-1 loss at Eibar, and they are the only ones sharing with Barcelona the privilege of zero defeats until now.

Although Atleti are not in their best shape this season, they proven to be fierce rivals and strong in defense, as they conceded only one goal in last five La Liga games. According to online sportsbook news Atletico Madrid are facing harsh criticism as they missed out the last 16 in Champions League for their group mates Chlesea and Roma. Simeone needs to score impressive record in Spanish La Liga to escape further criticism and to prove that he is still capable of motivating the players.

Espanyol are stumbling a lot on field this season. They were able to win only four games until now. They missed very important three points from Las Palmas after slipping into a draw 2-2. All their games with top 4 giants early this season were disastrous, especially that they could not score a single goal in the net of all of Barcelona, Valencia, and Real Madrid. If their performance remains the same they may receive another harsh defeat by Atleti.

If you wish to bet on Espanyol to be defeated by Atleti on week 17 in Spanish La Liga, we recommend checking Betsupremacy Sportsbook. The odds are in favorite of Atletico Madrid to win the match, while a victory for Espanyol is the least likely. You can also bet on the number of goals to be scored by both teams and many more. Take your chances and enjoy a good earning before the Christmas.