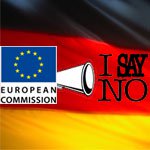 A string of complaints has been already voiced on the draft of German gambling laws from gaming operators and other industry players. Now the EU has expressed their disapproval of the proposed changes.

European Union regulators claim the current draft of gaming regulations can’t be passed as it’s in direct violation of the EU law. The European Commission stated “Germany should not adopt the draft.” The proposed laws would regulate all gambling in the country including online casinos in Germany.

Fifteen of the 16 German States have submitted their proposals to the European Commission. Sigrid Ligné, the secretary-general of the European Gaming and Betting Association (EGBA), commented on the proposed changes to German gambling laws, stating that they are simply reinforced regulations that made access to online betting “impossible”.

Ligné added: “This is extraordinary given that Germany is already subject to infringement proceedings. So we can only expect that the Commission will flag up the problems and act with sufficient strength.”

It shows that Betfair’s concerns, submitted to the Commission, found support. Betfair Sportsbook claimed that German gambling laws proposal was “discriminatory and protectionist”. Martin Cruddace, Betfair’s Chief Legal Officer, expressed the company’s expectations that Germany would amend the draft law “so that it genuinely caters for a competitive online gambling market in Germany.”

Mr. Cruddace told online gambling news in Germany: “As a responsible operator committed to transparency and integrity, Betfair hopes to obtain a license in the newly regulated German market, and we view today’s action from the Commission as a significant step towards us achieving this goal.”

EU regulators have yet not given detailed description of their objections to the German regulations proposal. Consultations with German lawmakers and officials continue. No official statement on European Commission reaction has been published by the German officials.