Everyone’s Now Calling for Ben Ancheff in the MLB

News >Everyone’s Now Calling for Ben Ancheff in the MLB 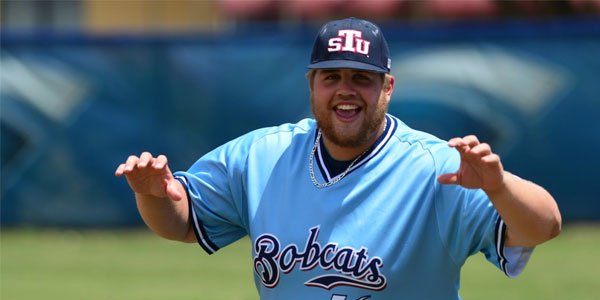 Baseball fans around the US are now calling for Ben Ancheff in the MLB after watching him on a video posted by Bleacher Report.

Ben Ancheff first came into the public spotlight in mid-2015. The hulking pitcher was featured on major news networks like CBS Sports and USA Today, and was humorously named “America’s favorite athlete.” Now, Ancheff is ready to make his move into the MLB.

Ancheff is currently a pitcher for the Lancaster Barnstormers, a team in the Atlantic League of Professional Baseball. He helped the St. Thomas baseball team reach the NAIA World Series in 2015, but ultimately fell short 10-7. After the game, people began to take notice of him.

“Over the summer, I was walking around a Phillies game with my girlfriend, and some people came up and said, ‘Hey, aren’t you Ben Ancheff from St. Thomas?” Ancheff said.

Ben’s fastball is said to top off at 94 MPH, and holds an ERA of 4.89. Once his time with the Barnstormers comes to an end, it’s entirely possible we’ll see Ben Ancheff in the MLB.

The 2017 MLB season has officially kicked off, and a number of online sportsbooks in the US have already set the betting odds.

Will we see Ben Ancheff in the MLB in the near future? If so, which team would you like to see him join? Tell us what you think in the comment section below, and make sure to follow GamingZion’s US gambling news page to stay up to date on everything related to betting on the MLB in 2017!