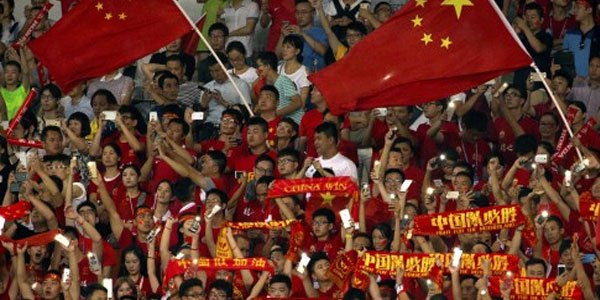 Money or reputation, it’s a big question in every profession, but it is even more important when your job is being followed by millions of fans. Check out who chose to follow the Chinese football dream instead of struggling to make the best of themselves.

The most expensive winter transfers were made by the richest football clubs in China. The Asian country aims to bring famous football players in China in order to boost the international interest towards their national league. People would think that this is a “mission impossible”, yet some football stars in China tend to prove that money is more important than fame, success or personal developments. Let’s check out those players who already agreed on chasing the Chinese football dream.

Alex Teixeira left Brazil back in 2009 to side with Ukrainian side Shakhtar Donetsk. His intentions were obvious: trying to perform as well as possible in order to attract one of the best European clubs to sign him. He did become one of the best players of the Ukrainian club. In addition, he was the most important member after Douglas Costa left Shakhtar for Bayern Munich.

Alex Teixeira could have went on a similar path to his Brazilian compatriot: UK gambling news believed that Liverpool wanted to sign the attacking midfielder, however the Reds couldn’t reach an agreement with the club. Shakhtar wanted huge amounts of money for their talented player and Jiangsu Suning matched their requirements. The Chinese club offered EUR 50 million and Shakhtar gladly accepted it. So did Alex Teixeira, who is now the most expensive and best paid football player in China.

The second most expensive football player in China is Colombian international Jackson Martinez. To be fair, his capture was the most expensive football transfer in China for a few days as he joined Guangzhou Evergrande just a few days before the Teixeira deal has been made between Shakhtar and Jiangsu Suning. The 29-year-old striker has signed a contract for 4 years. His manager will be World Cup winner Luiz Felipe Scolari.

A lot more was expected of Jackson Martinez. Porto discovered his talent and experts thought he was one of the most talented strikers in Europe. Atlético de Madrid purchased him this summer for a transfer fee of EUR 35 million, however the player failed to make an impact in the Spanish capital. He couldn’t give the best of himself yet Atlético managed to sell him with EUR 7 million of profit.Now Martinez can just take a rest and purely focus on what heprobably loves doing the most – filling his pockets with money.

Another Brazilian on our list of the most expensive winter transfers. Ramires was also the most expensive football players in China, but his record was also beaten pretty quickly – by Jackson Martinez. The former Chelsea star will be teammate with his fellow countryman Alex Teixeira as they both were captured by Jiangsu Suning. Ramires’ price was reported around EUR 28-32 million.

Online sportsbooks in China believe that capturing Ramires and Alex Tixeira was a huge enforcement for the Chinese club, yet the title-holder Guangzhou Evegrande are the biggest favorites for the upcoming Chinese Super League tournament. They have high chances of being able to defend their titles as they have an experienced manager with Luiz Felipe Scolari, together with actual world class players such as Jackson Martinez. However, they have far stronger competitors this season than they did in the last one.

After Guangzhou Evergrande and Jiangsu Suning, Hebei China Fortune are also hoping to become one of the most powerful sides in the Chinese Super League even though they just promoted from Chinese League One, the second division of Chinese football. However, it is not so obvious how they want to win anything by purchasing players like Gervinho. I guess they didn’t ask Arsene Wenger nor Rudi García for further information about the player. Or even just watch him on any of his games, really.

Gervinho is an Ivory-Coast international. He plays as a striker more or less successfully: he scored 20 goals in the international team. He spent 2 years at Arsenal and another 3 years at AS Roma. It’s really hard to highlight his greatest achievements. Maybe that he played African Cup of Nations final back in 2012. However, Ivory Coast fans can’t really by grateful for Gervinho for that match – the game ended with 0-0. The penalty shootout was still going on in the 8th round. In that moment, Gervinho missed, Sunzu scored and hence Zambia won the trophy. Anyways, good luck to Hebei China Fortune for spending a little bit of fortune on Gervinho.

Rational and reasonable decisions are not important when you have tons of money. That must have been the motto that Shanghai Shenhua used when purchasing Ezequiel Lavezzi from PSG for a reported transfer fee of around EUR 5 million. The Argentine striker’s contract was about to expire. The Chinese club could have started negotiating with the player now and sign him in 6 months for free – but they couldn’t wait to purchase him so they decided those 5 million Euros cannot be spent in any better way.

Lavezzi was a rather successful player. I don’t think anyone could call him a world class footballer, but he has good enough skills and outstanding willingness to work – that is his main ability. However, at the age of 30, the former Napoli and PSG player decided he will think about his future and collect as much money as possible during his pursuit of the Chinese football dream. His move will most probably see him out of the Argentina national squad, which gives him even less responsibilities by the ending years of his career.

6. Kakuta will be Gervinho’s teammate at Hebei China Fortune

Hebei China Fortune must have a thing for not so successful strikers who played and failed in Europe. That must be the reason why they decided to sign Gael Kakuta from Sevilla. He cost EUR 5 million. The French striker is still only 24 years old, however with the decision to chase the Chines football dream, he probably gave up on the idea of becoming an important player in European football.

In addition, online sportsbooks predict that Gael Kakuta could again be out of his new team pretty soon. Kakuta failed at all his clubs before and that must have happened for a reason. Either he does not have the qualities football experts thought he had, or he has some problems with mental strength, something that is very important in football. Chelsea, Fulham, Bolton, Lazio, Sevilla… He failed to make an impact in any of these clubs. Even though the fact that they expected a lot of the once-talented striker.

Fredy Guarín has also joined the group of ambitious players who want to chase the Chinese football dream. Guarín left Inter for the sake of Shanghai Shenhua, a team that finished in the 6th position in the Chinese Super League in the season 2015. They hope to be able to get better results in the upcoming season with the likes of Guarín and Lavezzi, and the manager Gregorio Manzano.

The 29-year-old midfielder has been an important member of the Colombian national team. He has participated on 58 occasions in the national colours. He was an important player at Porto as well as at Inter Milan. In here, he played in 114 league games and scored 15 goals.