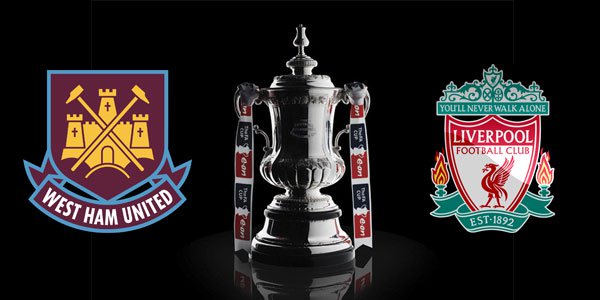 These two will meet the fourth and the last time this season, so have a look at the best West Ham v Liverpool FA Cup odds and betting tips!

Slaven Bilic’s West Ham United left Anfield Road after a goalless draw against a rotated Liverpool side ten days ago, enforcing an FA Cup 4th round replay. That was the third game between these two this season. Liverpool have been unable to score against the Hammers so far in this campaign. The Londoners recorded two victories against the Reds in the league (0–3, 2–0), so they are pretty much the most feared opponents of Jurgen Klopp’s side. This makes them also favourites at home, so let’s check out the West Ham v Liverpool FA Cup odds provided by Bet365 Sportsbook, one of the best internet betting sites in the UK!

West Ham United are 2.55 (31/20) favourites according to the price posted by the operator. The visitors are slight underdogs with Bet365 Sportsbook having the best West Ham v Liverpool FA Cup odds for their win around the internet with 2.95 (39/20). Draw, which triggered extra time, goes for 3.40.

West Ham are expected to continue torturing Liverpool in their fourth game in the season. They are unbeaten at home in eleven games in all competition, having won four of their last five games at Upton Park. However, Liverpool might get back Daniel Sturridge, Divock Origi and Philippe Coutinho. Though they won’t be all in the starting line-up, the Red’s attacking opportunities will get a significant boost for sure. And they will also get back Jurgen Klopp, who missed the Sunderland league game on Saturday due to an appendicitis operation.

So, after considering the build-up and the West Ham v Liverpool FA Cup odds, internet betting players might think about putting some money on the visitors. However, as Klopp pointed out, extra time is also possible, so your best bet might be on the Team to Qualify market. Liverpool goes for even odds there, and this could be the one you need.

Klopp, as said, is after an appendicitis surgery, so as he expressed himself, he has a “few holes” in his body. He has to control himself, his emotions and his movement on the sideline. Anyone who bet on sports in the EU will see a Jurgen Klopp that is seemingly so calm that they won’t believe. Wonder what he would do if Daniel Sturridge scored the winner in the 120th minute…

For more West Ham v Liverpool FA Cup odds, go to Bet365 Sportsbook, where you are already protected against goalless draws when placing bets on the Correct Score, Full-time/Half-time or Scorecast markets! Also read the Bet365 Sportsbook review in our online betting guide to find out more on this award winning provider of football odds!