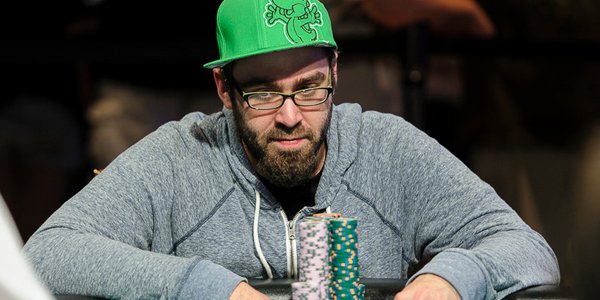 Without any professional poker experience, Billy Pappas has a good chance to make WSOP history.

An exceptional foosball player, William Pappaconstaninou had little idea what he was getting into when he joined this year’s World Series of Poker (WSOP). The man had no professional background in poker and this is no child’s game. But the player has surprised everyone and managed to finish the Main Event with 18,500,000 chips.

The 2014 WSOP was full of excitement, with unexpected twists and turns. And after eight days of poker, the Main Event established its final table. The line-up for the 2014 November Nine includes: William Pappaconstantinou, Felix Stephensen, Martin Jacobson, Dan Sindelar, Bruno Politano, Andoni Larrabe, and William Tonking.

This autumn, the foosball player will have a unique chance to make WSOP history.

Pappaconstaninou – who goes by Billy Pappas – was a new face among the thousands of players who gathered at the American poker room at the Rio All-Suite Hotel & Casino in Paradise, Nevada at the end of May, for the 2014 WSOP.

Billy says he could very well be the second best foosball player in the world. “I’m definitely top three, probably number two, but this guy Frédéric Collignon from Belgium is the best of all time,” he explains.

Billy Pappas made his way through a 6,683-player field and managed to qualify for the final round of the World tournament, which is scheduled to begin on November 10. After cashing out his winnings on July 15, he is now trying to decide what the next step will be.

From table football to poker

When a new player makes his way to the top, everyone starts to get suspicious or curious at least. But Pappas is an honest guy. While he does occasionally play online, you won’t see his name in top rankings on some famous poker site in the US. He hasn’t played the game at a professional level before.

There’s no endorsement money at stake either; he’s just trying something new for a change. When he’s not on tour playing as a table footballer, he works as a dealer at the Rockingham Park Poker Room in Salem, New Hampshire.

“When the cashier said I had $730,000 in my account I was a bit freaked because I’d never had more than $15,000 before,” he told reporters. “I bought a one way ticket to Las Vegas figuring I’d fly to this Foosball tournament in Austria when I lost. I extended my hotel stay every day. Now I guess I’ll just head home for a bit.”

What makes Pappas’ success so surprising is that he has no professional poker experience at all. Some of his rivals say that he is just a smart kid from Massachusetts, who got a few lucky cards and managed to keep his head in the game.

“I was good because I wasn’t intimidated”

At the last qualification table, Pappas sat down in front of Mark Newhouse, a professional player who made the final last year and has won millions of dollars throughout his poker career. But Pappas probably didn’t even know who he was playing against.

A rich friend he knew from the foosball circuit helped him pay the stake to enter the tournament and he didn’t really expect to get so far. Now he has less than three months to prepare for the final battle.

“I used to play games with buddies and I played on Pokerstars and did pretty well in tournaments. My goal was to making it through the first day and cashing. I just set myself small goals after that.”

“I was good because I wasn’t intimidated,” he says. “Maybe I don’t want to know too much about these guys.”

There is only one player who could put Billy Pappas off his game, and that was Craig McCorkell. But the 28-year-old from London is out and did not make it to the “November Nine” list, while William Pappaconstaninou is still on it.

With a bit of luck and a lot of focus, Billy could be the first professional foosballer to win the WSOP. If he does, he will be $10,000,000 richer. Of course, in order to get there he has to defeat players like Martin Jacobson, who has won over four million in his career, or Newhouse.

“That’s the thing that connects foosball to poker: Knowing your opponent is the most important thing. Now I know my opponents,” he said. Let the chips fall where they may!