Rene Schnitzler, former St. Pauli striker, is at the center of match-fixing scandal in German Bundesliga. 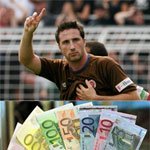 The wise men have long warned that not all that glitters is gold. A relatively unknown German footballer Rene Schnitzler got into the spotlight of match-fixing scandal in Germany. This brings into question the credibility of “most honest” league in the world, the legendary Bundesliga. A championship that is played without the world’s biggest stars, but it is nonetheless among the most watched in Europe.

“Approximately eighty percent of the German players are betting. It is a disease. I’m addicted to the game” – 25 years old Rene Schnitzler told investigators in Bochum, according to Italian La Gazzetta dello Sport. The young man, a striker from St. Pauli  Hamburg , played from 2007 to 2009 and scored seven goals in 40 matches. “I lost everything, including the house. I decided to speak, I hope others will do it too” – added Rene.

The trial is scheduled for March 21. Predictions are that Ante Sapina, the main suspect in this fixing scandal, and Sapina’s associates will be prosecuted. Schnitzler warns of corruption, because players are in debt and thus in the hands of criminals. This can lead to match fixing with a lot of money at stake.

Evidently these recent discoveries will result in hundreds of games being investigated, as well as many people.