81 percent of French do sports regularly according to online betting firm PMU. 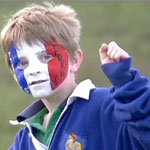 PMU is a company that specializes in online gaming, but French gambling laws allow them to conduct lifestyle surveys.

PMU know that a bit of publicity is always good, plus as a French online betting provider, they can always use the data for product development.

According to the results, a stunning 69 percent of the French do sports on a regular basis. 81 percent of them watch sports on television, with the internet being the second most popular platform.

41 percent of the French use sport as a form relaxation. Watching television comes second with 40 percent and reading is third with 35 percent.

The most popular form of exercise is walking (37 percent, but you have to consider the French petrol prices), cycling (26 percent, just imagine a Frenchman on the bike with a baguette) and swimming (23 percent).

Not surprisingly, children tend to take up sports they see on television. Their most popular is football by far of course, followed by judo, tennis, swimming and handball.