The Swedish Gaming Board has filed a lawsuit against GVG Interactive in Växjö, hoping to convince GVG to shut down 6 slot machines. 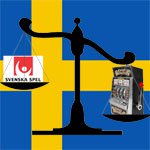 The Swedish Gaming Board has filed a lawsuit against GVG Interactive in Växjö, hoping to convince GVG to shut down 6 slot machines. The Gaming Board asserts a belief that these slot machines are breaking Swedish gambling laws because GVG is allegedly unlicensed.

During spring 2010, the Prosecution Office in Växjö concluded their own examination of GVG Interactive and Lasse Johansson, the company’s owner. The prosecutor suspected a violation of the Lotteries Act. This investigation served as the first step for the Gaming board. The slot machines were discovered in a subsequent police inspection and suspicions arose that winners received cash. The prosecutors concluded that the legal gambling situation in Sweden is ambiguous.

The Gaming Board asserts that only Svenska Spel has the right to offer both offline and internet gambling in Sweden, including (without limitation) slot machines. While two cases head to the Swedish Supreme Court for a ruling which should provide clarification, the Gaming Board still chose to move forward with a law suit against GVG Interactive. Elin Vidlund elaborated “With another prosecutor, we can perhaps get a different result and we find the arguments against [these slot machines] are spot on. We still have the vast majority of convictions in Sweden and we must act according to practice.”

As the slot machines remained standing since the prosecutor’s action, the Gaming Board sent two letters requesting GVG Interactive’s owners remove the slot machines. They subsequently went to the police.

Lasse Johansson has not reacted. He declared “I laugh most about it here. My lawyers have advised me not to act at all…. [If it could be shown] in [Swedish court] that the machines are illegal so we [would shut] them off right away. The state wants to have a monopoly on this game and the Gaming Board’s their [extended] arm.”

If the Gaming Board has their way, Swedes looking to enjoy slot machines must travel to a Svenska Spel’s land based casinos in Sundsvall, Gothenburg, Malmo, or Stockholm. While Svenska Spel’s monopoly extends to the internet, they do not offer an online casino in Sweden and their internet services do not include slot games.