Heated Debate on Online Gambling in the UK 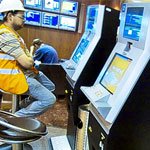 A fixed odds betting terminal, introduced in the UK in 2001, is an electronic device usually displayed in betting shops in the United Kingdom. They enable players to bet on sports in UK on the outcome of sport games and events with fixed odds.

Generally, online gambling sites in UK are much fairer for the player. But those who have a high moral view on gambling, they are all same. Numerous media put a bad light on UK gambling this year, including Channel 4 and the Daily Mail.

Of course politicians jumped to the opportunity to join the debate on FOBTs, and not surprisingly, their statements were not at all supportive, either. Labour minister Harriet Harman even stated that admitting FOBTs to operate was a mistake.

UK online gambling also got its share with the usual sensation-hunting lines with greedy operators and dangers of addiction. And of course they made the usual point of most of the UK gambling operators being moved offshore for tax reasons.

But has somebody ever wondered why so many UK operators chose to move their business offshore? Simple. The British gambling laws are much less favorable than those offered by an off-shore location. Frankly, can you blame a company for going offshore if they are not able to pay anymore the taxes the government imposed on them?

Something makes us think that once a consumption tax on gambling will be introduced, there’ll be less complaints from the UK government…