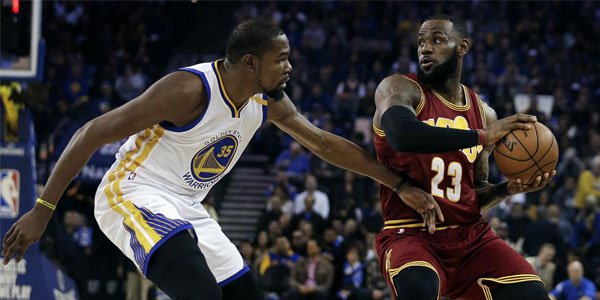 The biggest series in basketball will soon begin, and some great NBA Finals bets are now available for members of Intertops.

We’ve nearly reached the end of the 2017 NBA season. It’s been an exciting one, and only two teams remain. The Warriors and Cavaliers will face off once again in the Finals, and fans of NBA betting in the US have access to a wide range of amazing wagering options. Let’s take a look at two of the best.

Bet on the correct score of the series

There are obviously some great odds available for betting on individual series games, but those that want to take it a step further can already wager on the exact score of the series at the end.

It shouldn’t come as much of a surprise to see the Warriors with the much higher odds to win the series in 2017. Not many online sportsbooks in the US are predicting a blowout however, as the odds of them winning the series 4-0 are set at 8.50. The odds that they win 4-1 are the highest at 3.65.

The Cavs have looked great this season, but are the considerable NBA underdogs heading into this series. Their odds to win 4-2 are set at 7.00. Think the Cavs will dominate? Their odds to win the whole series 4-0 are set at 34.00. This is one of the great NBA Finals bets to make money.

Bet on the series MVP

Another one of the great NBA Finals bets available at Intertops is on which players gets named the series MVP. This is always a tough award to predict, but some fantastic odds are available to cash out.

Kevin Durant is leading the MVP award betting odds right now at 2.75. He’s been phenomenal since joining Golden State this year, even after sustaining an MCL strain in March. Kyrie Irving has a shot at making US gambling news by earning the award here as well, as he’s been one of the most important players on the Cavs over the post season. Irving’s odds to win the MVP award are set at 11.00.

To find a full list of great NBA Finals bets this year, make sure to head to Intertops. It’s here that you’ll find the best odds for all the games, and on the NBA Championship outright winner.