“Finding out How to Cheat in Poker was the Easy Part…” 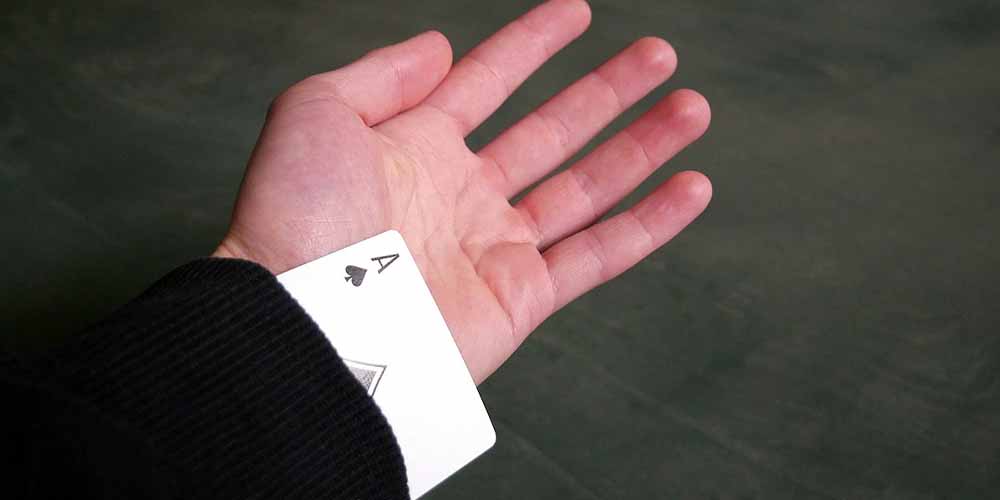 Poker is one of the most wanted games to play for cheaters. Although it is illegal to fool the opponent during the game, there are many reckless players who try to win this way. We have collected real-life stories on how to cheat in poker, but it is better not to repeat them outside a family circle as you can go to jail.

Cheating in gambling is as risky as attractive for both newcomers and professionals. It is an easy way to win the game and especially pleasant when you wager money. However, we recommend not to use tips on how to cheat in poker even during the non-profitable games – for example, while playing on matches with friends. Just a warning. Now, let’s turn to the most notable cases of tricking casinos and gamblers.

Players, who learned how to cheat in poker games online

At the first sight, tricking online casino sites in the US or any other country is a gone case. How is it possible to fool a machine? Moreover, how can cheating take place in casinos, if they take all possible security measures? However, the real-life experience of some gamblers shows that every system has its loopholes. There were few cases of “successful” cheating in poker, though these players were later revealed, banned or even imprisoned. Who are they?

Russ Hamilton has found one of these loopholes. He was the Ultimate Bet Casino co-worker, who created a program for cheating online. It allowed him to see his opponents’ cards and outplay them. It was one of the most effective ways to trick an online casino. Surely, he was later caught and his experiment had bad consequences. It led to banning from visiting any online casino after stealing $17 million from users. For some reason, he escaped imprisonment for his actions. Moreover, online casinos enhanced their security systems after this case, so such programs have no chance to work out. They are immediately recognized and banned by casinos nowadays.

Trying to reveal how to cheat in poker online, hackers from Eastern Europe have developed a special bot. It took pictures of the player’s screens and allowed frauds to see his/her hand. As a result, the player always lost the game. Obviously, these hackers were banned from gambling, but the idea of having such technology is still alive, unfortunately, and our next cheater used it too. Therefore, always remember to check reviews about reliable online casinos to avoid such cheaters.

An online casino owner Scott Tom did something similar to fool gamblers. This infamous cheater used a bot that took pictures of players’ hands from their screens. As the head of the casino, Tom sold the winning combinations to victims’ opponents who were playing in the same room. Surely, the authorities closed his casino after learning the truth and Tom paid $300.000 fine.

Darren Woods managed to steal millions from gamblers but took the most severe punishment of all cheaters mentioned above. He used multiple accounts to play in the same poker room. This trick was different from using a bot/program as it required the player’s involvement. The outcome was predictable – he knew 5/6 hands in the room, he figured out his opponent’s hand, he won. Later, Darren was forced to return the money and pay fines. Also, Woods went to jail for more than one year.

Nowadays, most of the reliable online casinos like Bovada verify your identity in order to prevent such cheats. Although you can’t fool anyone while playing there, you can also be sure that no one fools you.

Poker stars who cheated in a real-life

Cheating during the real-life poker game is much easier, however, illegal as well. These poker stars experienced how it feels to fool their opponents and then go to jail. Do you still want to know how to cheat in poker?

Poker players Jean-Paul Pasqualini and Cedric Rossi from France took over $2 million thanks to cheating. They used secret signs to communicate with each other during tournaments. The trick was simple – they shared information about their cards with body language, special sounds or gestures. However, Pasqualini and Rossi forgot about cameras that filmed their cheating. Obviously, the duo was banned from poker games forever.

Valeriu Coca from Moldova used the oldest and probably the most obvious way of cheating. He marked cards (primarily aces and kings) during several tournaments of the World Series of Poker. Coca’s attempts of cheating failed in the third round, and he received a ban from casinos for his entire life.

Although there are many people wondering how to cheat in poker, they must remember that it is illegal. Even if you succeed, modern technologies will quickly find you. You will be forced to return “winning” money and be called a cheater till the end of your life.

Click here to visit Bovada where you can play safely