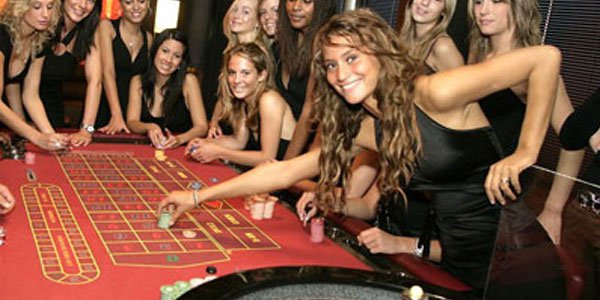 Ditch the old stereotypes, women are gambling more than ever before

From crowded betting shops to smoke-filled poker rooms, gambling has always been thought of as a male-dominated activity. Our heads are filled with images of James Bond playing baccarat in a luxurious casino somewhere on the Mediterranean, of tough guys in leather jackets hustling underground American poker rooms, of men of all ages placing bets on their favorite English Premier League club.

The numbers don’t lie; men are still more likely to gamble than women. But the disparity is much smaller than you think. It was long thought that women made up roughly 33 percent of the worldwide gambling market. That number is now believed to be closer to even.

Gone are the days of gambling being thought of as a masculine pastime, a place where men could go to get away from their wives or girlfriends. Nowadays, there is a decent chance they may run into their significant other at the casino, or unknowingly visit the same online poker site.

The growing significance of women in the gambling market is worthy of gambling news coverage. So much so, that we’ve decided to dedicate an entire series of articles to the topic. If you hadn’t realized that the game has changed, it will be undeniable by the time you’re finished.

This series will cover the following topics:

The reader will be introduced to a broad range of topics, analyzing everything from which games women play to how gender is represented in the media to how female legislators feel about gambling legalization. In addition to that, we will do our best to answer some questions raised in the series. Why do women gamble more than they used to? Is the change driven by shifting attitudes or the new opportunities available to women? Hint: the answer is a bit of both, but mostly the latter.

• Gambling is no longer the male-dominated activity of decades ago

We will hear from some leading female figures in the industry, both players and executives. They will discuss where the industry is, where it came from and where it’s going. Wynn executive Debra Nutton will recall her experiences in the industry, having started as a blackjack dealer in 1979 and moving her way up to the boardroom. Denise Coates of online sportsbook in the UK Bet365 will discuss being a CEO in one of the most male-dominated sectors of the industry.

In addition to that, we will do our best to answer some questions raised in the series. Why do women gamble more than they used to? Is the change driven by shifting attitudes or the new opportunities available to women? Hint: the answer is a bit of both, but mostly the latter.

Also, which games do women play? We will hear from some major female poker pros like Vanessa Selbst, Annie Duke and Vanessa Rousso about the growing popularity of poker among women. Despite that, research shows that most women prefer to play “escape gambling” games like bingo and slots in online casinos in the UK, US and elsewhere. Why? We’ll take a look at some analyses, devoting an entire piece to the online bingo industry.

The last few pieces will dig deeper into more specialized topics. Now that women and men often compete head-to-head in casino games, can we observe any innate gender differences at play? Some psychologists say that men are better endowed to excel at blackjack while women have an edge in poker. As expected, many others disagree.

While the industry has changed immensely in recent decades, media representations have not quite caught up. Most of us still associate gambling with old-fashioned Hollywood images of masculinity. We will take a look at some especially iconic caricatures, taking the time to enjoy them while considering their fading relevance.

And lastly, readers must remember that these exciting developments come with a price. More female gamblers mean more female gambling addicts. The final piece will give some analysis of the problem and mention some resources that are available to help.