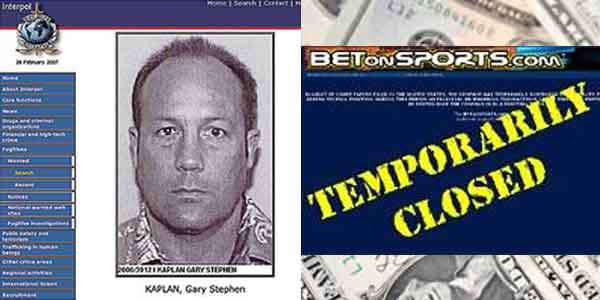 IRS pursuing a civil tax case against Gary Kaplan, where he may end up owing an additional $36 million.

Gary Kaplan, the founder of BetOnSports, is a subject of further IRS investigation. The federal authorities busted one of the online sportsbooks in the United States, which operated out of Costa Rica, thus breaking the law by providing its services to Americans.

The founder has already agreed to seed $43 million to government coffers as part of his plea deal, and now another $36 million could be added as part of the civil action brought on by the IRS.

BetOnSports was a subject of a federal investigation and its operation were deemed illegal under American gambling laws. The owner was pursued for some time, before his arrest in the Dominican Republic, and extradition back to the United States.

Charges of illegal bookmaking, mail fraud, racketeering, and using wire communications to transmit wagers were brought against Kaplan. The combined felonies can have a punishment of up to 100 years behind bars, not to mention a criminal forfeiture of $180 million.

Kaplan entered a plea agreement with the government two years after his arrest. The deal would ensure he spends up to 51 months in prison and will forfeit millions to the federal government. But the plea also specifies that no further criminal charges can be brought against him. However, IRS found a loophole where Kaplan could still be subjected to civil, civil tax, or administrative action.

The federal judge specifically asked Kaplan during his sentencing, whether he understood his vulnerability to civil tax actions, and Kaplan said he did, but still wanted to go carry on with the plea deal.

IRS taking advantage of the loophole

Naturally, IRS were quick to exercise their right to pursue further action against Kaplan, which can now result in additional $36 million to be paid to the coffers.

The new penalties were discussed in a Forbes article by Tony Nitti, an independent tax expert and legal writer. According to Nitti, Kaplan’s pre-penalties tax bill of $24 million, can be transformed into up to $!60 million of taxable income.

Nitti says the assessment can follow from looking at the events, which followed the bust of Costa-Rica based BetOnSports operation. American gambling news quoted Nitti’s words in the Forbes article: “Understand, sports betting is illegal in the U.S. because it is an evil, duplicitous act. (Unless of course, you’re in Vegas, in which case, feel free to parlay the Cowboys anmd 49ers to your heart’s content! No hypocrisy there.)”

IRS has particularly studies the transfer of Kaplan’s shares in BetOnSports to a number of fund trusts in the Channel Isle of Jersey. After the company’s PLO, the trusts went on to sell around 42 million BetOnSports shares for almost $100 million. But at that time Kaplan had no basis in the company’s shares. And he failed to report profits or file a tax return in 2004 and 2005, allegedly that is.

IRS investigation led to a conclusion that the Jersey trusts acted as grantor trusts for the United States tax purposes, and therefore should’ve been reported. The estimated tax gains, which Kaplan owes on the trust funds are at around $24 million.

Additional $12 million in associated penalties have been added by the IRS to the $24 million, making the total figure a cool $36 million, and remember, that’s on top of the $43 million Kaplan already agreed to pay under criminal plea deal.

In his article, Nitti continued to suggest: “Faced with a $36 million tax bill, the taxpayer argued that the IRS was precluded from bringing a civil tax action against him under the plea agreement. The Tax Court, armed with the sworn testimony from the plea hearing, had all the proof it needed that this was not the case.”

He concluded by saying: “As a result, on top of the $43 million the taxpayer was forced to cede to the government as part of his plea deal, he was also held responsible for an additional $36 million in tax and penalties, proving once again that crime does in fact pay. For the IRS.”

The IRS civil tax case against Kaplan is still open, but there’s little doubt the $36 million in taxes and penalties will be added to his total balance due. The story once again proves it doesn’t pay to run an illegal sports betting business in the USA.

However, now that further states, besides Nevada, have opened their doors to online gambling in the United States, the need to operate semi-legal or illegal bookies and casinos to reach the American market have significantly diminished.