Jean Quiquampoix Goes Down To Rio All Guns Blazing 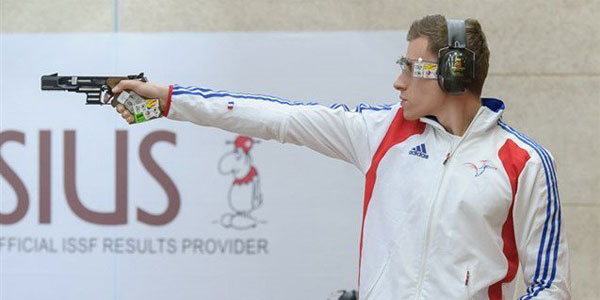 With the Olympics all but upon us the teams for all the events are shaping up and in France they’ve a rising star in the shape of the young Jean Quiquampoix who has already set his sights on the medals at the games and aims to give getting his hand on one his best shot, and in his case he means it quite literally as he lines up as part of the French Olympic Shooting Team.

Several Olympians have already been robbed in Rio, some of them at gun-point but the felons from the Favelas better beware of pulling a piece on this young man from Marseille whose accuracy with a pistol is not to be underestimated. A French and World junior champion, the International Shooting Sport Federation (ISSF) currently have Jean Quiquampoix ranked fifth in the world even at the senior level he’s only just entered.

His winning ways however go back much further and Jean Quiquampoix first showed up on the international shooting radar when he won the European Junior Championships in Bologna way back in 2012, repeating the feat the following year all whilst retaining his French national title. However it was perhaps when he started breaking records that he became someone to back if you like to bet on sports in France, mayhap on Bet365 et al, because he’s something very special.

Does Jean Quiquampoix Have A Shot At The Gold?

The first record to fall was the Junior world record at the finals Granada, but it is one he was destined to revisit each year. Jean Quiquampoix took it again in Munich still competing at the junior level and then in his senior level debut, his age allowed his score to stand as a new Junior World Record, as he went on to win the Rapid Fire Gold shooting alongside those with far more experience. As debuts go, it was a splash and a half, the 29 hit record a sign of things to come.

“What’s my next goal?” Jean Quiquampoix asked rhetorically. “I want to win the Olympic Games!” Aptly demonstrating the drive and determination behind this young Olympian who, if you are going to take advantage of French gambling laws to back some of the competitors in the Olympics at Bet365, you should be sure to keep an eye on because his form is, if anything getting better at the senior level, the competition obviously pushing him to bigger achievements.

Everyone’s Nightmare: A Lawyer With A Gun

At law school when he’s not shooting targets at high speed, Jean Quiquampoix knows there is an aspect to the Olympics that will test more than his ability to hit the target and he admits to having received some media training ahead of Rio this summer, despite having got a very credible bronze at the World Cup event there earlier this year. The Olympics is the biggest show on Earth and since he’s likely to make French gambling news headlines if he wins, the interviews are inevitable.

Obviously he’ll be up against some of the best in the world and it remains to be seen if this talented junior champion and record holder can pull off another 32 shot final round to take the gold in Rio. There will be stiff competition from the Chinese team but Jean Quiquampoix is undaunted by the task ahead of him saying; “I want to win this year, even if it is only my first [Olympics]” after gaining his quota to make the French Olympic Shooting Team and qualifying for a trip to Rio de Janeiro this summer.