Key Points to Consider When Betting on Scottish Independence

News >Key Points to Consider When Betting on Scottish Independence 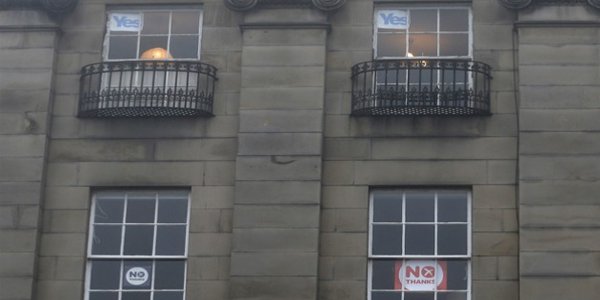 With numerous different sources stating their opinions when it comes to Scottish Independence, some important elements must be looked at first.


Following a week of uncertainty across various markets, several big name companies has voices their intention to leave Scotland if it decides to leave the United Kingdom. However, current polls indicate that almost nothing has changed for Thursday’s Scottish Independence Referendum.


Eight polls that were reveled over the last weekend suggested that they have gotten no further in their resolution. Seven of the eight pools showed No ahead by between 2% and 8%, which is almost the way it was a week ago. However, one poll from ICM indicated a Yes in front by 54-46. Mobile betting sites are offering No at average odds of 1.28.

What polls are reliable?

• Polls are generally no closer to a resolution

Considering that the only pro-Yes poll came from ICM should in itself serve as a warning for No supporters. This is due to the fact that ICM is viewed as the best firm in delivering polls and other political research, mainly for their great performance in General Elections.


It is obvious that many firms have odd outliers, which is separate ICM poll with a larger sample by putting No five points more on top of 51%. Also, the general trend serves as a better guide on the vast possibilities that are involved in the elections.


Normally, poll firms correctly indicate the situation at hand. For instance, when the US Presidential Election was still on they have all correctly predicted the states that were won by each candidate. However, the current situation that Scotland finds itself in is quite different from anything that poll providers have faced before, according to gambling news.


They usually employ a measurement tool where their weigh results from previous voting patterns to determine the likelihood of any outcome. But once again, this has proven to be a different and unique set of circumstances, making the job difficult to predict. The turnout is expected to be 15% to 20% higher while Party affiliation is likely to be less relevant.


For these reason Yes may be somewhat underestimated, as general polling models take more consideration for those that are inclined to vote higher. No has been supported by the disproportionately older voters, while the chance of an extra third of the electorate appear at the General Elections, younger voters may be averse to the proposal.

The problems and the possibilities

According to gambling news in the UK, some voters will in the end support No but will not have the courage to admit it. These voters are referred to as “Shy Noes” and polling firms have for a long time found a difficult time with these specific measurements. They have also underestimated their performance until they have decided to include it into their models.


These sort of voters are likely to among the 10% of people who remain undecided and don’t know and who in fact hold the key to the results. Although they are a small group of voters, they are considered to be the No campaign’s secret weapon.


Strategy and organization plays a big part in determining the outcome of such a close race. The No strategy has fervently warned on the possible ramifications that may happen with the economy and that may also lead to other relevant sectors being brought under danger. This strategy has been heavily advertised across numerous media outlets in the country.


The organization on the ground is deemed to be of greater importance. Getting voters to do their part and make sure they voice their opinions takes a great effort. For instance, Obama made heavy use of targeting messages and ensuring that content was passed along the social media properly was the reason why he was so successful in his pursuits.


By now it may be reasonable to assume that many voters have already voted, while no additional supporting arguments have to be made. Polling results indicate that Labour voters has made a big push by voting for Yes, which means that large industries, David Cameron and Tory financiers haven’t managed to change their minds.