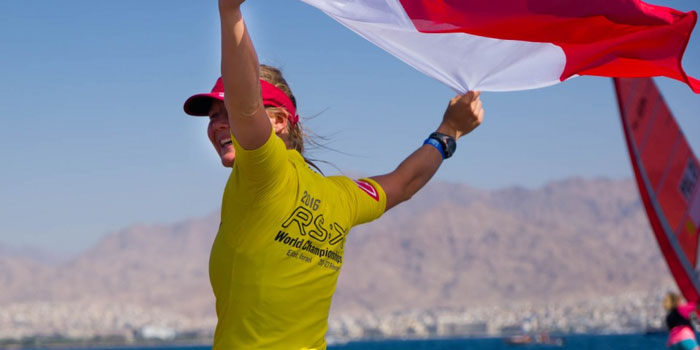 Reaching the peak of performance just in time for your shot at Olympic glory can require years of hard work and dedication but talent and determination can ensure that just when it’s time to go for the gold at the greatest sporting event in the world you’re on the top of your game, and with less than a month until the Rio 2016 games get underway Malgorzata Bialecka knows she’s timed it all perfectly.

Sailboarding, or windsurfing if you wish, has a bit of an odd history at the Olympics, and not merely because events must take place when scheduled whether or not there actually happens to be wind enough to perform the very basic necessity of actually moving the competitors. First seen at the Los Angeles games of 1984 the core concept hasn’t changed, and out on the water Malgorzata Bialecka will be racing an identical RS:X the same as all the other competitors.

Naturally if you’re a sailboarder from Poland gambling laws of meterology will play nicely just when you need them to things can get a tad disappointing, and bizarrely in 2012 the ISAF Council voted to remove Windsurfing as an Olympic sport and replace it with Kite Surfing, a controversial decision to say the least and one that, thankfully for Malgorzata Bialecka and her chums, the General Assembly of the ISAF voted to overturn just a few months later, keeping windsurfing for the 2016 games in Rio.

Bet365 Will Have Odds On Malgorzata Bialecka After Eliat

Whether or not the General Assembly has done the windsurfers a favor in the long run remains to be seen. The venue for the windsurfing is Guanabara Bay a body of water known to be so toxic as to contain drug-resistant super bacteria both in the bay itself and in the river that empties into it. This is probably due to 70% of all sewage from Rio de Janiro, a city of some 12 million, flowing into the water untreated. This means Malgorzata Bialecka and her fellow entrants face more than one challenge.

Former Chief Executive of World Sailing, Peter Sowrey, has said he was fired specifically for attempting to get the venue changed to Buzios just down the coast citing the pollution in the bay as just cause. The politics behind the Olympics apparently not quite in line with those who have described the conditions as akin to “sailing in a toilet” or an “open sewer”. If you’re Polish gambling news of the pollution might have put Malgorzata Bialecka off going to Rio, think again.

The Games in Rio are coming at just the right time for Margaret Bialecka as after the last eight years of performing well, but not well enough in International competitions has left her hungry for success and whilst she did manage a credible third place at the Universiade in Shenzhen back in 2011 since then her form waned a fair bit managing just 51st position at the World Championships in Cadiz the following year, however since then she has improved a great deal.

Those of you that like to bet on sports in Poland at Bet365 or similar sites should keep an eye on Margaret Bialecka as just last year in Al Mussanah she battled up to fifth spot, and then just earlier this year showed that her form-arc has come good just at the right time winning the World Championships in Eilat, Israel, making her amongst the favorites to take a medal on the podium in Rio, even if she’ll then possibly need to take an ambulance to the nearest toxicology unit.