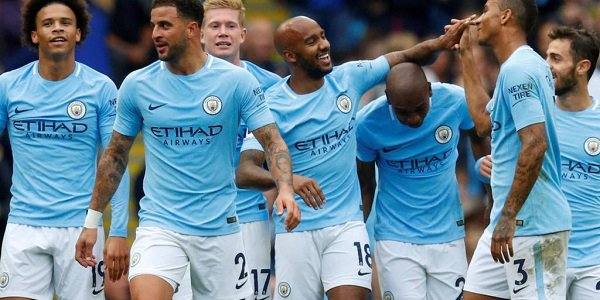 Mancherster City’s season has been outstanding so far, which obviously caught the eye of all online sportsbook news sites in the UK. Pep Guardiola did manage to build something extraordinary on the blue side of the city. The Premier League seems to be way too easy of a challenge for the Catalan manager, but can he succeed in other tournaments as well?

Can Man City be stopped in Premier League?

Asking the question “Will Manchester City win Premier League?” would be way too boring. Come on. They are already 15 points ahead and it’s only “half-time.” They are still unbeaten after 22 gamedays. No team has managed to win the Premier League without losing a single game since the historic Arsenal-march back in 2014.

Can Man City go unbeaten? Can Man City be stopped by any other team this season? So far it seems like it’s not going to happen anytime soon, however, that doesn’t mean it will be the same in the end of April. The Premier League is probably theirs already, which means only one thing…

…and that one thing is to take advantage of the Man City betting specials! Can Man City go unbeaten throughout the whole season? Bwin Sports offers 6.00 odds for Man City to stay undefeated in the Premier League, which would be an amazing achievement, but still, it would be a huge surprise for Man City to win Champions League…

Can Man City win the Treble this season?

Pep Guardiola often does this. He humiliated the world with Barcelona and he did the same at the helm of Bayern Munich what he’s doing right now. In the fall season. But then spring came, and his team suffered in Champions League, three out of three times. By spring, his teams ran out of spirit and were stopped easily in the most prestigious club tournament.

Did Guardiola learn from his previous mistakes? Can Man City win Champions League? Can Man city win the Treble? You can see some pretty cool Man City betting specials at the online sportsbook directory, with Bwin Sports offering the best special odds for Manchester City. They gave 19.00 odds for Man City to win the Treble, which is the Premier League, the Champions League and the FA Cup.

Should you bet on Man City to win Champions League? Pep Guardiola surely dreams of the most prestigious trophy, which he failed to add to his collection when in Munich. He spent quite a fortune, with the pure aim of winning both the Premier League as well as the Champions League.

His team was lucky enough to draw Basel in the Round of 16, which will probably merely be a training match ahead of the Quarter-finals. That’s where the real challenge is set to begin. Could Man City beat the biggest teams in Europe? Could Pep’s men challenge Bayern, Barca or Real? The odds for Man City to win Champions League are 4.00 currently at Bwin Sports. Are they up for it?

Bet on Alexis Sanchez’ Next Club: Is Alexis to join Man City?

One might say that Man City is still not ready, even though Pep spent half a billion Euros to strengthen his squad. They are about to bring in another top-class forward and the Man City betting specials expect Alexis Sanchez to be that person. Is Alexis Sanchez joining Man City this January? He could be a great mate for Kevin De Bruyne…

Online sportsbook sites in the US expect him to do so: the odds for Alexis to join Man City are only 1.10. He would be allowed to play in the Champions League as well, because his soon-to-be ex team, Arsenal, failed to qualify for the tournament. Will Alexis be the key member to help City win the Champions League?

If you’re interested in other Man City betting specials as well as many other special betting offers for football, you should check out the latest review about Bwin Sports and start playing as soon as possible! Man City are facing Liverpol this weekend, feel free to check out our Premier League Betting Preview for Round 23!