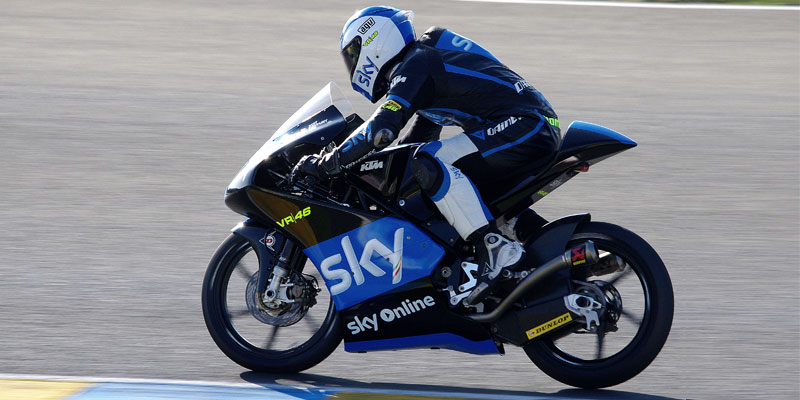 The Grand Prix is back and the Moto3 class has a lot of new talent for this season. And there is still a long way to go until the last Grand Prix in November. But our Moto3 World Championship winner odds are going towards the Italian rider Romano Fenati.

Moto3 is a lightweight class of the Grand Prix motorcycling race. And it usually features the talent we will see riding in the next few years across the different classes. The 2019 World Championship started in March and already counts with two Grand Prix. As online sportsbook news sites in Italy report, this season, Moto2 and Moto3 will adopt the qualifying format of MotoGP. This means that the fastest 14 riders of the 40-minute long Free Practise sessions, will go straight to Q2. While riders who finish in 15th place or lower will race in Q1. Both the qualifying sessions will be 15-minutes long and the 4 fastest riders in Q1 will then compete in Q2.

For now, bookmakers are favoring Aron Canet. However, according to our betting preview, Romano Fenati might finally conquer a winning-title, after experiencing Moto2 last year.

Romano Fenati started riding in Moto2 last year, after his second place in 2017 in the lightweight class. Nevertheless, he was disqualified for grabbing the brake lever of Stefano Manzi at the San Marino circuit. This caused his ban from competition until the end of the year.

This way, he will be riding this year in Moto3 again, with the Snipers Team. Although he has never won the title, he previously had a successful run on the class and now, especially with the moving of the top riders of 2018 to the intermediate class, his chances are higher.

Now, he will be trying to regain the trust lost, by racing in the most honest way possible. And he hasn’t stood out yet in the Championship despite being the fastest lap in Qatar, but his odds are 5.00 at Bet365 Sportsbook.

Another rider that will definitely benefit from last year’s top riders’ absence in this year’s Moto3 World Championship is Lorenzo Dalla Porta.

Despite finishing on the 5th place, his season-ending last year was very successful. He won at Misano and secured three 2nd places after. 2018 was certainly the year that marked him as a possible future MotoGP rider.

In Qatar, he secured 2nd place but was leading the race until the last lap. And in Argentina, he led two of the last four laps.

Now, he (5.00) will surely be validating his quality even more and has really good chances of winning at online sportsbook sites in Italy.

Moto3 has new young stars that seem that this year they will affirm themselves as top riders of the class. None of them were able to reach the podium last year, but now things are changing.

Jaume Masia is 18 years old and has just won the race in Argentina. The young rider started from pole position but wasn’t close to the top until the last lap, when he went from the 5th position to the first.

He is certainly ready to reach the podium more times and this last victory will be a good source of motivation in the future. This is why his odds are 6.00 at Bet365 Sportsbook.

But Masia is not the only revelation this season. Kaito Toba is the next Japanese hope for the MotoGP, as he started the season winning his first Grand Prix in Qatar. Even though it was only by 0.053 seconds, it was a well-deserved victory for the 18-year-old, as he battled it out until the end against Dalla Porta and Canet.

Toba is currently the first in the ranking and, if things go on like this, he will (7.50) become the surprise of the season.