Multiple Honours on the Line for Neymar World Cup 2018 Specials 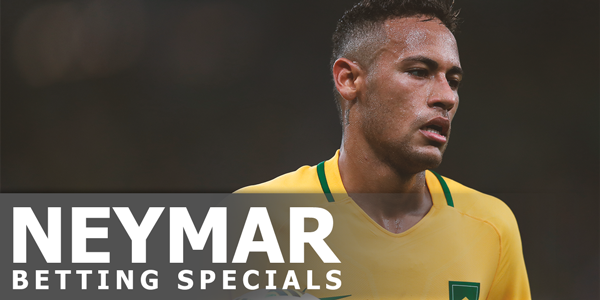 Neymar being named in a Brazil 23-man World Cup squad came as no surprise early this week. The fans are already expecting the Brazilian to be majestic in Russia, and there are some great Neymar 2018 World Cup specials to bet on before the tournament takes off.

According to online sportsbook news in Russia, Brazil are indeed one of the frontrunners to win the competition. Therefore, Neymar is expected to play at least six matches in Russia alongside the magnificent young superstars as Man City’s Gabriel Jesus and the Red’s Roberto Firmino. It is no surprise to see the bookies offering profitable Neymar World Cup 2018 specials on the Brazilian to be awarded the golden boot, the golden ball, and to score a hat-trick in at least one game. In fact, the Brazilian could achieve multiple honors if he gets 100% fit by mid-June.

What to expect from Neymar?

Neymar will compete with some of the best players in the world in Russia similarly as he attempted to do but failed this season with PSG. However, he is expected to be on a higher level with Brazil unlike PSG, simply because he will enjoy more support from his fellow Brazilians. He is favourite to become 2018 World Cup top scorer with (11) odds at Betvictor Sportsbook, unlike Messi, Ronaldo, and Salah who do not enjoy strong support from their national teams.

Neymar and his fellow Brazilians will start their World Cup campaign against Switzerland on June 17, followed by games against Costa Rica and Serbia in Group E. The group is relatively easy one, so could Neymar score a bucket-load of goals in group-stage? Why not!

The Brazilian striker faced several setbacks in crucial moments before, losing the chance to rise up as the best player. Neymar was leading his national team in World Cup 2014 until he received serious injury in quarter final against Columbia, being forced to watch from home his team’s disastrous World Cup loss to Germany. Neymar again faced similar situation this season when he left PSG to Brazil one week before his team were dropped out by Real Madrid in Champions League quarterfinal.

According to online sportsbooks in Russia, Neymar will be fit to play sometime in June, but he will definitely fear another unexpected setback to come in critical moments of the tournament. If Neymar avoids injury and brings out the best in him, he could receive the golden ball in Russia, especially if he succeeds in scoring a hat-trick in some games. At Betvictor Sportsbook you can bet on golden ball for Neymar, and to score a hat-trick with (13) odds.