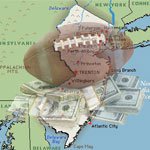 Sen. Lesniak, the known proponent of the legalization, intended to rely on the latest DoJ statement to speed up the legalization bill in the remaining period of the current legislature session. The S3019 bill was about to be heard and voted on by the Assembly and Senate committees.

Gov. Christie, however, had other plans. After exercising his veto right the last time, despite legislative approval, he once again delayed the process of legalizing online sportsbooks in United States on constitutional grounds.

Lesniak told United States gambling news that he had a conversation with the governor and agreed to postpone the introduction of the measure until the next Legislative session. He said: “I expect that we can get it through the Legislature and signed by the Governor within the first few weeks of the new session.”

Lesniak revealed that Christie has concerns and legal questions regarding the bill, such as whether the bill has to be put to voters on a ballot as a constitutional amendment or not. Lesniak added: “There are competing opinions on that within the administration and within the industry. But I am convinced that we can move forward and get it up and rolling without amending the constitution.”

Lesniak is confident that his latest version of the legalization bill covers most of the governor’s earlier reservations, particularly his wishes to keep core betting operations in Atlantic City.

Christie shared with the press: “I think New Jersey should be in that [internet gambling] business. I think we should be a epicenter for that business, but I want to do it right. I do not want to rush and get legislation that either doesn’t pass state constitutional muster, or creates other problems for us.”