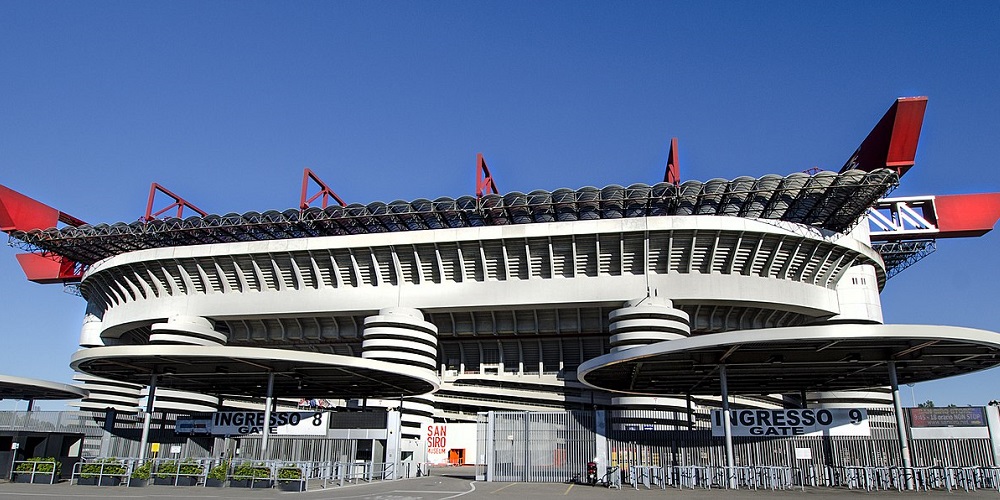 The two Milanese clubs are planning to build a brand new stadium that would take the place of the iconic San Siro.

Milan rivals partner up to build a new ground

Rivals Inter and AC Milan have come to an agreement to work in tandem towards a proposed replacement for San Siro (also known as Giuseppe Meazza Stadium), which would be built by 2023 at a cost of €600m, online sportsbook news report.

The plan involves the demolishment of the current stadium – which was opened in 1926 – and would see the new ground constructed just a few hundred meters away from the current location.

A few years back, AC Milan have come out with plans to have their own stadium, which would have meant relinquishing San Siro solely to their rivals Inter. But instead of going ahead with that proposal, the Rossoneri opted to team up with the Nerazzurri in the plan to construct a new rendition of San Siro, and also, as a consequence, split the massive cost outlay that’s going to be required if they get all the permits on time.

Currently, the local council has approved the plans, but the two respective clubs are yet to come up with the necessary finances for the ambitious project. They are hoping to secure at least €25m per season in naming rights from a big sponsor, while other, potential revenues stream are also being explored.

San Siro has served as the home ground for AC Milan since its opening in 1926, while Inter moved in 1947; the two rivals are therefore logistically required to find the optimal schedule when they’re using the stadium, which requires one side to play on the road while the other one is playing at home.

The iconic ground has hosted a range of big football matches throughout history; it was a major venue for the 1990 World Cup in Italy, as well as staging the 2001 and 2016 Champions League finals, that saw Bayern Munich and Real Madrid clinch European titles, respectively.

The current capacity of San Siro stands at a little over 80,000, making it one of the biggest grounds in Europe; it’s 10th based on the number of seats. But the plan for the new ground would be to reduce the capacity to around 60,000, as that’s the average attendance number per match for both of the Milanese sides, per online sportsbooks in Italy.

This begs the question – is it worth building a brand new San Siro stadium, at a cost of €600m? Well, according to the Inter and AC Milan bosses, it is. And the reasoning behind this is that it will make the ‘fan experience’ greater, in addition to the idea that they plan for the stadium to be one of the more aesthetic grounds in the world.

“We envisage a smaller capacity because the average attendance of the two clubs is 60,000,” said Inter chief Alessandro Antonello. “What matters is the experience for the fans, it might be a smaller stadium but an excellent one.”

“We’ll have the most beautiful stadium in the world,” commented AC Milan president Paolo Scaroni. “We want Milan to have a great stadium and make Milan the capital of football. Perhaps a new stadium would be easier, but there are also large-scale renovations like Anfield.”