Now is the Perfect Time to Bet on Frampton vs. Gutierrez Online! 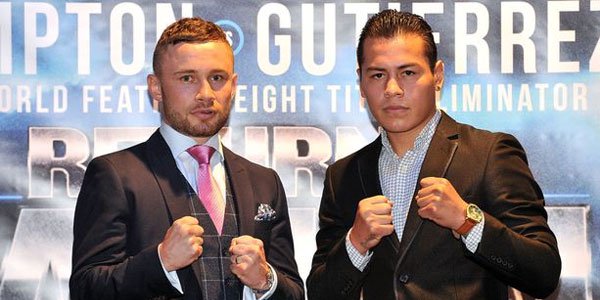 With the fight now just a couple weeks away, now is a great time to place your bet on Frampton vs. Gutierrez with Paddy Power.

On July 29th, one of the UK’s most accomplished boxers steps back into the ring after suffering his first career defeat. Carl Frampton will be looking to move on from that WBA title-losing performance against one of Mexico’s most talented young boxers, Andres Gutierrez.

Frampton won his first major championship in 2014, and won 5 more fights before taking a rematch with Leo Santa Cruz. It was a back and forth brawl, but in the end Cruz was named the victory by majority decision.

Gutierrez earned the attention from boxing betting experts around the world by going 34-0 to start off his career. In June of 2016 he lost his first fight by decision against Cristian Mijares, but bounced back with an impressive TKO victory. Most online sportsbooks in the UK have now set the odds for the bout between these two men. Let’s look at who’s coming in as the favorite.

Carl Frampton has been thrown to the wolves since the beginning of his career, and generally passes each test with flying colors. He’s entering as the older, less experienced fighter, but those looking to bet on Frampton vs. Gutierrez online might be surprised to see him enter as the massive boxing betting favorite according to Paddy Power with odds of 1/25.

Andres Gutierrez is an extremely skilled boxer with a wildly impressive record giving his young age of 24, but he’s facing an uphill battle in this one. If he can utilize the same forward, aggressive pressure that Santa Cruz did against Frampton he might be able to make UK gambling news with the upset, but as of now he’s the huge boxing betting underdog with odds of 10/1.

Do you want to bet on Frampton vs. Gutierrez online? Which fighter gets their hand raised on the 29th? Tell us what you think in the comment section below, and head to Paddy Power to find a full list of 2017 boxing betting odds!