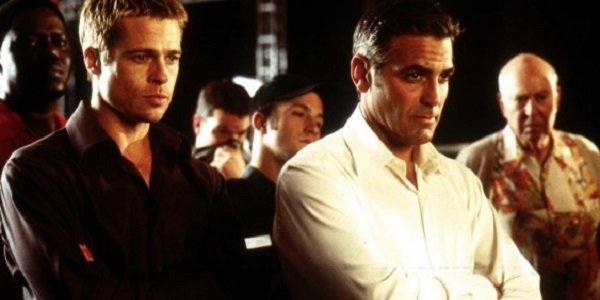 “Because yesterday I walked out of the joint losing four years of my life and you’re out cold decking teen beat cover boys. Because the house always wins. Play long enough and never change the stakes the house always takes you unless when that perfect hand comes along and you bet big and then you take the house.”

These are the words of Danny Ocean, hustler extraordinaire.

“Ocean’s Eleven” is a film that’s routed in gambling while beautifully capturing the art of the hustle. Throughout the film are constant images of Las Vegas, Casinos, Dog tracks, betting tables and all of the elements that you cannot experience through mobile casinos. The film has an all-star cast including George Clooney, Brad Pitt, Matt Damon, Julia Roberts and Andy Garcia. The film, directed by Steven Soderbergh, is a remake of the 1960 film starring Dean Martin, Sammy Davis Jr. and Frank Sinatra.

Daniel “Danny” Ocean is a consummate gambler who life force is driven by a desire to pull off any hustle that might come his way. Through a caper gone wrong that involved the selling of stolen tribal masks, Ocean is incarcerated and goes to prison. After his release, Ocean visits his parole officer and attempts to live an existence without gambling.

Unfortunately quitting something that is almost a part of whom he is, proves too frustrating for Ocean and he has to violate his parole and find more satisfying pursuits. Going to Vegas, Ocean finds a “table man” named Frank Cattan who’s going by the name of Ramon and asks about the whereabouts of his friend Rusty. Travelling to California, he meets his friend Rusty Ryan, a gifted hustler in his own right, who is making money teaching actors how to better portray gamblers on film.

Ocean appears in the midst of a game of poker instructed by Rusty. As the two square off, Rusty gives valuable tips like “leaving emotion at the door” and “not letting the other person buy their way out” of a hand. Upon winning the hand, Ocean tells Rusty of his plan and tries to convince him to accompany him. After accepting to join Ocean, he and Rusty travel to Las Vegas to propose their plan to wealthy casino financier Reuben Tishkoff.

Ocean’s plan is to rob three casinos (Bellagio, The Mirage and the MGM Grand) simultaneously, by stealing from one place where all of their money is kept during boxing match. Since US gambling laws state that Nevada casinos must keep enough money to cover all their patrons’ bets, there could be as much money as USD 150 million.

Ocean forms his eleven and pulls of his ultimate heist

The gang gradually comes together

The three casinos that are in Ocean’s sights belong to Terry Benedict. In addition Benedict is currently dating Tess, Ocean’s ex-wife. This becomes the undercurrent motivation of Ocean as he and Rusty search for their team. Ocean goes to Chicago to get Linus Caldwell, a gifted pickpocket who comes from a family of renowned thieves. After witnessing Linus lifting someone’s wallet, Ocean lifts his wallet and later gives him the offer to gather codes to bypass the cages.

The Mormon Twins, Virgil and Turk, are skilled mechanics who built a duplication of the Bellagio Vault. Livingston Dell, electronics and surveillance expert joins the team. Also on the list is the Basher, a gifted demolition expert who can bypass the Benedict’s combination safe. The “Amazing Yen”, an acrobat, is needed as a “grease man” who can climb wires. At the dog track, Rusty incorporates Saul Bloom, old time con artist for support.

Blueprints are made of all three casinos including the duct ways and electrical pathways. As the plans become more concrete, Ocean confronts Tess. The plan is to get through the casino cage, through the security doors using print detectors into the elevator shaft, deactivate it, bypass the cameras, go through armed security and into the vault. Pulling off such a plan would easily make US gambling news. A power outage will be made in order to carry out the funds undetected.

Robbing a super-secure vault, hair perfect – these are real pros

Benedict, a brilliant megalomaniac, discovers the plot, but underestimates Ocean and comes up short in apprehending him. Through the use of fake video footage, Benedict is unaware of the actual heist as its happening. With the money missing, Benedict confronts Ocean and tricks Benedict into a video confession saying he would trade Tess for the stolen money. Although Ocean ends up arrested, serves some time in jail, is released, picked up by Rusty and Tess. Benedict’s men follow them as they drive off.