Online Gambling Boom in New Jersey as 32,000 Sign Up

News >Online Gambling Boom in New Jersey as 32,000 Sign Up 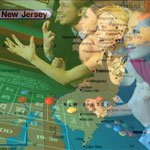 The New Jersey Division of Gaming Enforcement has announced a huge take up for the new online casinos in the US state. In total, more than 32,000 players in New Jersey set up an online gambling account only a week after the complete launch of the system on 26th November. It was revealed that 5,000 players registered on Thanksgiving alone.

The regulating authorities commented that some users created accounts across several of the state’s new gambling sites, too, so the number of players could be even higher. Regulators have also been unable to confirm how many bets were placed, but all in all, it is a great piece of gambling news for the beleaguered state.

So as to ensure compliance with the new American gambling laws, each casino needs to employ geo-location software to ensure players cannot play from outside of the state borders. It is this software more than any other that has caused problems for users, with some players being blocked despite living within the state.

All in all, however, the launch could be considered a great success for online gambling in the US. 32,000 players within a week is not a figure to be sniffed at, and there’s sure to be more to come, too, especially as mobile casinos make their way to New Jersey sometime in 2014.

The other states to legalize online gambling, so far, are Nevada and Delaware, although the home of Las Vegas has yet to get approval for a full range of casino games. With California about to approve a new bill in the new year, and Texas and Pennsylvania hot on their heels, this is an exciting time to be a gambler in America.