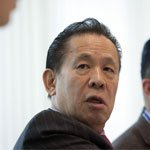 The Philippines are gearing up for the latest round in trials against Japanese casino magnate Kazuo Okada. The man behind the giant planned Manila Bay Resorts has previously resisted invitations to attend a trial into criminal practices at his companies, but the Department of Justice may have just found a way to issue the Japanese national a subpoena.

Under Philippines gambling laws, no overseas individual may own a majority of Philippines casinos, something that Okada has been careful to avoid by not directly owning any of the companies involved. However, the DOJ have now found a way through after discovering the business address of AGA Philippines, a company in which Okada is a part owner.

The outcome of the trial could effect the development of the planned Manila Bay Resorts – the casino on the front page of Okada’s Universal Entertainment company website. In an Asian marketplace squabbling for Chinese gamblers in particular, the collapse of any deal over the giant resort could be a problem for the Philippines.

With no online casinos in the Philippines, the country relies on their land-based casinos for tax income. As such, they have extensive regulations to ensure that any income stays within the country.

This latest gambling news is a definite move forward in the case against Okada, although whether he is actually sentenced remains to be seen. Along with the big boss, several of Okada’s employees are under suspicion. Tiger Resorts directors Ken Taura and Tetsutaro Shibata have already appeared in court, and a large number of individuals connected to Okada are also involved.

This case is one of the biggest cases against casino operators in Asia in recent times, and the outcome will have far reaching outcomes, especially if it affects the building of the Manila Bay Resorts. With American companies such as Wynn ready to pounce, the outcome will come under a lot of scrutiny.