Place A Bet On The French Presidential Election This Weekend 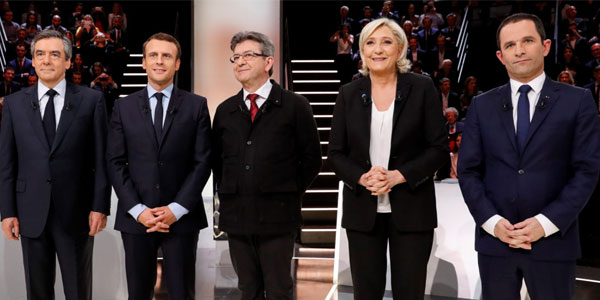 With the surprise announcement of a general election in the UK the bookies have gone into political overdrive and are offering a range of options for the inclined including the chance to place a bet on the French Presidential election this weekend, but is this really going to be another surprise like Trump and Brexit or will all the alarmist hype fade to another center-left leader for France?

One of the issues with much of continental politics betting is that there are often far too many parties involved. A quick summary of the recent Dutch Election results reads like one of Tom Clancy’s acronym attacks listing military special forces units or shadowy intelligence agencies. That means it’s rather nice to swing focus onto France, heading into the first round of its Presidential Election, and find there are four clear front runners representing each of the main political compass points. Such a relief.

Of course if you like to bet on sports in France you might think a bet on the French Presidential election a bit unexciting, however with such a tightly packed field near the front and a late arrival making up the running this could well be an explosive first round of voting that decides which two will go through to the second round of voting later in the year. But just who will the French choose and who should you back if you’re going to do a little political gambling and aren’t the whimsical Teresa May?

Will Le Pen Win The First Round But Fail In The Second?

Marine Le Pen of the National Front is the first glimmer of hope the far right party has had of winning in the last fifteen years or so, the immigration situation allowing her message of intolerance gain traction, sapping a lot of support from Francois Fillon of the Republicans in the centre-right who has been mired in a scandal involving his wife and children doing jobs that don’t exist for wagers from the tax payer which did. Even his own party aren’t placing a bet on the French Presidential election win now.

Le Pen is expected to make it into the second round (photo: france24.com)

Facing these two are the centre-left En Mache led by Emmanuel Macron who is a pretty safe bet on the French Presidential election if only because all the polls show Le Pen won’t fare well if the vote is twixt her and anyone else and he’s likely to be that someone else. Beyond Macron to the far left is the Parti de Gauche led by Jean-Luc Melenchon who has put on a late spurt to be up with the front runners but if you’re going to take advantage of French gambling laws, you probably don’t want to back him to win.

Bet On The French Presidential Election At Bet365

At the bookies like Bet365, Melechon gets 10/1 to win the this first round, Fillon 9/2 and Macron 2/1 but the favorite to win is Le Pen on 5/6 and she’s probably a good bet on the French Presidential election until the second round, where if she’s up against Macron, she’s toast. Bet365 Give Le Pen only a 3/1 chance of being the next President, behind even Fillon at 5/2 and clearly their Evens odds on Macron do tell the full story. Sure, the populists could pull through, but the chances are they won’t.

If you’re going to hit up Bet365 to bet on the French Presidential Election you can easily back Le Pen in the first round and Macron in the second, and you should because French gambling news headlines will only be of those odds shortening unless an external situation effects the election. Recent terrorist related arrests in Marseille reminded everyone that France is under a state of emergency and that the democratic political process can sometimes be held hostage by unforeseen and untimely, tragic events.