Place Your Bet on the Bantamweight Title Holder at the End of 2017! 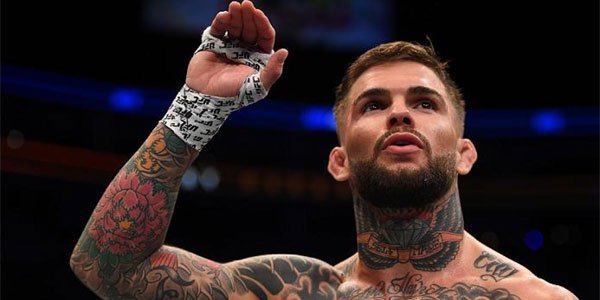 Two of the best 135 pound fighters on the planet will be facing off in July, and now is the perfect time to bet on the bantamweight title holder at the end of 2017 with BetVictor!

The UFC’s bantamweight division is arguably the most competitive in the UFC right now. Longtime champion Dominick Cruz was recently defeated, opening up a huge number of possibilities for contenders to challenge for the belt. On July 8th, 2017 current champ Cody Garbrandt and TJ Dillashaw will fight. Before they face off, check out the betting odds for who will hold the bantamweight title at the end of the year.

It took Cody Garbrandt just over two years and five fights in the UFC to earn his shot at the bantamweight title. While many MMA betting experts praised his striking ability and solid defensive wrestling, not many predicted he would get past Dominick Cruz, who was 22-1 at that time with 5 WEC and UFC title defenses.

Despite coming in as the underdog according to nearly all online sportsbooks in the UK, Cody beat Cruz for most of the contest, dropping him on numerous occasions. After five rounds he was declared the winner, and was quickly matched up with former training partner TJ Dillashaw.

If Garbrandt can get past TJ at UFC 213, he will likely hold the belt for a long time. Cody is the hardest hitter in the division, and showed in the Cruz fight that his wrestling is elite. His odds to remain champion at the end of the year are set at 6/4. If you want to bet on the bantamweight title fight between him and Dillashaw, Cody is listed as the slight favorite with odds of 8/11.

Many MMA fans feel TJ Dillashaw should still be champion. He won the belt with an incredible performance back in May of 2014, and defended it twice before being matched up against Dominick Cruz, who was returning after years outside the sport due to injuries. These two battled it out for five rounds, but in the end Cruz was awarded the (controversial) split decision victory.

Since that fight, TJ has faced and defeated two top contenders. His most recent bout was likely the most impressive of his career, as he dominated John Lineker from start to finish. Dillashaw’s striking game is likely his best asset, though he’s shown time and time again the ability to take down opponents and utilize submissions.

A bet on the bantamweight title holder in 2018 being TJ Dillashaw is a solid wager. He claims to have Cody Garbrandt’s number heading into their fight in July, but is still the slight underdog with odds of 11/10. BetVictor lists TJ’s odds to hold the belt at the end of the year at 15/8.

Although he’s a slight underdog to capture the belt this year, Jimmie Rivera is one of the bantamweight division’s most promising fighters. With a 19-fight unbeaten streak including four straight victories in the UFC, Rivera is closing in on his shot at the title, but must first get past dangerous striker Thomas Almeida.

Jimmie Rivera’s most recent fight came against Urijah Faber, which he won by a dominant decision. In that fight he showed off his massively improved striking game. Rivera is one of the smaller fighters at 135 pounds, but makes up for his height with a heavy wrestling style and compact striking techniques.

With a victory over the aforementioned Almeida, Rivera will likely earn his shot at the belt. Whether he can beat the elite at 135 pounds remains to be seen, but if you want to bet on the bantamweight title holder at the end of the year, Jimmie may have the best odds of anyone to make UK gambling news at 12/1.

A bet on the bantamweight title holder at the end of 2017 is one of the best wagers you can make right now. Head to BetVictor today to find a full list of 2017 MMA betting odds, and tell us who you think holds the belt at the end of the year in the comment section below!