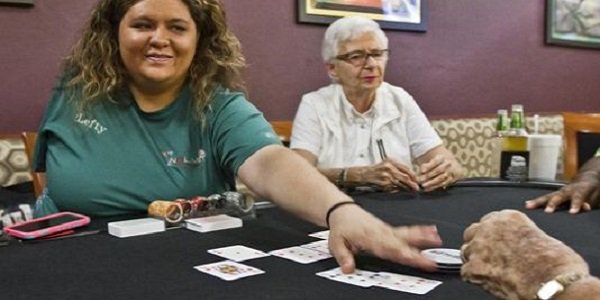 Heather Schneck, also known as poker dealer “Lefty”, has only one arm to play with. However, that doesn’t stop her from doing what she does best – playing poker.

What is the standard way to play poker? Sit at a table, take your cards with both hands, observe them, think in your head what your next move is going to be and then either call/raise or fold your hand. Even if you’re playing poker at
online casinos in the US, you will probably do most of these virtually. Although the majority of people do it in this fashion, it’s not the only way to play the game.

Heather Schneck has adopted the nickname “Lefty” for a reason. She has only one arm to play with, and it’s the left one (hence the nickname). When it comes to cards, she is a natural, and there seems to be no obstacle she can’t overcome.

Poker dealer Lefty is a dealer for No Limit Entertainment

No Limit Entertainment is in charge of operating the No Limit Pub Poker Tour, which is a poker tourney that takes place in bars and pubs across Southern and central Florida. And poker dealer Lefty was fortunate enough for them to spot her talents in the game. The owner and director of No Limit Entertainment, Jon “Gunny” Gracey, decided to employ her as a dealer for the US poker rooms where the competitions are held.

Her card skills with her left amaze players all the time

Most of the 30 dealers that work for No Limit Entertainment take about 12 to 15 second to shuffle a deck of cards. In Lefty’s case that takes slightly longer, around 22 second on average, and she is aided by a shuffle machine. But Gracey is not fazed by this, as the table that she works on is normally more occupied than the ones that have dealers with two hands. And according to him, there is a distinct reason why people tend to flock to her table.

As reported by the Naples Herald, Schneck has a welcoming persona that is able to attract players with her charm and smile. But the real reason for having a following has to do with the fact that she has only one arm. And that is what intrigues many poker players. Gracey highlighted that the physical requirements for the job would have to be altered to have her working as a dealer, however they managed to find a way. “We knew that because of her handicap we would have to be creative, but we wanted her to be a dealer.”

Lefty lost her arm in an unfortunate car accident

Nearly six years ago, in December 2009, Schneck was on her way back home with two other friends, and one of them was driving the car. They just left from a poker tournament organized by another company that was held in Venice, Florida. Supposedly, the driver had a few drinks and the road that they were on was pretty dark. All of a sudden, they spotted a broken down vehicle, but they were already going too fast to stop in time and they ended up swerving which resulted in a terrible accident.

The resolution with which she faces her predicament is truly inspirational

Her friend sitting behind her lost her life, while she lost her right arm. This seems like a huge misfortune for anyone, however poker dealer Lefty managed to cope with it little by little. She had to relearn almost everything except writing, and the story behind that is pretty interesting. She recalls, “A few years before my accident I worked at a hotel. A guest I was checking in couldn’t sign his registration slop because he broke his dominant hand, so I thought I’d learn how to write with my left hand in case I ever hurt my hand. I didn’t know how much I’d appreciate that later.”

Despite having only one arm, she didn’t allow that to get in way of success in the poker business. Last year, she entered a No Limit poker tournament that boasted around 400 players. Out of all of them, poker dealer Lefty reached the final three contestants. According to USA Today, a little over six months ago, Jon “Gunny” Gracey offered proposed to her the dealer’s job. Gunny asked, “Are you cool with you capitalizing on us and us capitalizing on you?” She immediately responded, “It’s cool. Let’s go.”

So, if you ever happen to find yourself in Florida, make sure to check out poker dealer Lefty at one of the bars hosting the No Limit Pub Poker Tour. And if you’re looking for legal gambling info, have a look at US gambling laws.