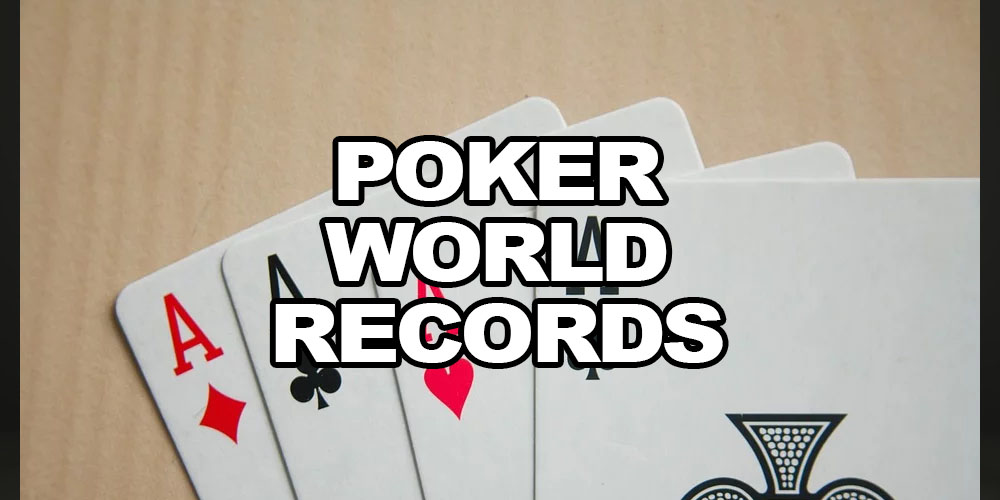 Will you be surprised if we tell you that there are numerous poker Guinness World Records? If not, you should have already read about them. If yes, it’s time to learn about the most impressive achievements in poker history that can hardly be beaten.

Like many other sports, poker has collected plenty of phenomenal achievements and record-breaking facts during its history. With the flow of centuries and emergence of different poker variations, players were becoming more and more addicted to this game. At some point, just sitting and playing became boring, so people started to think how they could stand out from a crowd. This led to five unbelievable situations, which we are going to talk about right away.

One of the most amazing records in poker history belongs to Bertrand Grospellier also known as ElkY. This Partypoker pro from France is famous for playing the most poker tables at once – 62! Grospellier established the world record in 2009 and even finished it with some profit. Interestingly, he wasn’t even prepared for such a marathon. As ElkY said after finishing with the last table, he took a flight to Monte Carlo without sleeping the night before the tournament. However, in the morning he was already sitting in front of 62 tables at the $6.50 buy-in level and dealing with more than one table every minute! Isn’t it amazing? The official name of his record written in the Guinness book is “Most Online Poker Tables Played in 1 Hour” and is still unbeaten.

Another unbelievable world record in poker was established by Damon Shulenberger in 2013. At the Iron Man Poker Challenge in Manila, the American player participated in the longest continuous poker tournament ever. It lasted for 48 hours 56 minutes, surpassing the former record-holder for more than 12 hours. What is even more impressive, Shulenberger managed to win this tournament! Yet he took home only $18,000, disappointment was not among his feelings. It’s amazing how this player was able to stay awake for 2 days without losing his attention and patience. To imagine how difficult it is, try to stay awake for at least one night at any online poker site and then imagine yourself sitting in a room for 48 hours. Well done, Damon!

If Damon Shulenberger’s success left you indifferent, the next guy’s record is not possible to ignore. Phil Laak or Unabomber woke up famous after beating the record for the “Longest Marathon Playing Poker by an Individual”. An Irish player spent 115(!) consecutive hours playing poker, which is almost 5 days in a row! Firstly, Laak wanted to play for 80 hours as it was enough for establishing a record. However, he didn’t stop at that mark and prolonged his performance for another 35 hours. That’s crazy! Yet he won just $6,000, his new Guinness record was a much more important thing.

We switch from an everlasting poker game to the most massive one. The World Series of Poker (WSOP) broke the record for the largest ever attended live poker tournament in 2015. The “Colossus” event was attended by 22,374 people at once, which is the best result ever. However, these numbers aren’t the only ones to impress you. Just think about 362,425 physical poker chips that were used during the tournament as well as 4,480 card decks bought specifically for it. The total prize was no less amazing – $11,187,000. To sum up, this WSOP event will be always remembered for its colossal numbers.

The Guinness World Records won’t be complete without the biggest online poker tournament ever made. According to the official reference book, the 2015 Pokerstars online tournament was the most massive one with 253,000 players joining the party. This event set up the worldwide record which is still unbeaten. The tournament was held on an online poker site in the UK, but the winner arrived from Austria. Simon Grabenschweiger won $10,000 that day and entered the poker history as the best out of a quarter of a million people. Congratulations!

You can learn more about Partypoker here.