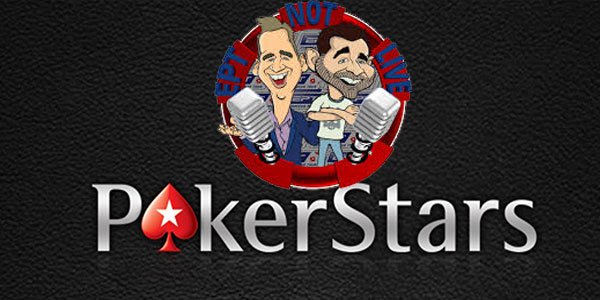 First episode available to download and listen to now.

PokerStars, the famous poker company which operates under UK gambling laws recently disclosed the launch of the novel podcast named ‘EPT Not Live’. The show will be aired on a weekly basis and is being hosted by EPTLive commentators, James Hartigan and Joe Stapleton. The show will feature behind-the- scenes broadcasts at live events, interviews with famous people, interviews with Team PokerStars Pro and online qualifiers members. Listeners will also have the chance to win exclusive prizes.

James Hartigan said of the show that “It’s just like EPTLive, only it isn’t live, it’s recorded. And you don’t get to see any poker, or graphics, or…anything at all actually. In fact, it’s nothing like EPTLive, apart from the irreverent and irrelevant chat.”

While Joe Stapleton, the show’s co-host, added: “If the EPT were a movie, this would be the DVD commentary. Although most of our audience probably doesn’t know what a DVD is, so I think this is probably best explained by a series of emojis. If you like the EPT, this show will make you smile….”

The first episode, now available for airplay, will showcase an interview with mixed martial arts legend and online poker fan, Tito Ortiz. Otiz was at the PokerStars Caribbean Adventure in January and played the Main Event, so he speaks of his experience there. PokerStars, which is owned by Amaya, and which have online poker sites in UK and elsewhere, will allow poker enthusiasts to download through Apple iTunes, and Android users can access it through their usual podcast application or the RSS feed.

Hartigan continued by noting that “We want EPT fans to get involved. We’ve got money-can’t-buy prizes up for grabs, including exclusive ‘Everyone Loves a Chop Pot’ T-shirts. Each week, one lucky listener will get to come on air and go head-to-head against Joe Stapleton in an EPT trivia contest. Chances are, they’ll win!”.

EPTLive webcast has been linked to the PokerStars European Poker Tour for 8 years running and is an award-winner. In 2013, it was awarded the Favorite Web-based Poker Show prize at the BLUFF Reader’s Choice Awards. EPT Not Live hopes to be funny and to pierce the airwaves with ‘light-hearted poker content to the popular podcast platform’.