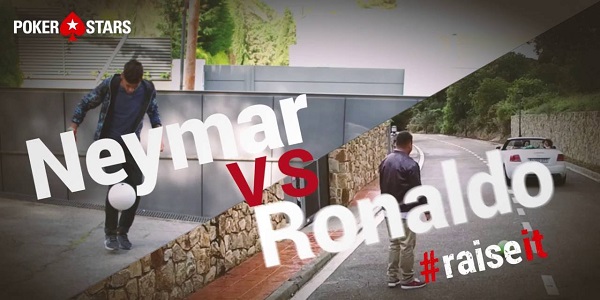 PokerStars marketing team has done it again: online betting news in Brazil report that the country’s greatest football star Neymar Jr. invited one of the best footballers of all time, Ronaldo Luiz to the RaiseIt challenge. And he accepted and now the fight has begun as the 2 world class footballers are trying to prove they can do better than their rival’s former performance.

The point of RaiseIt challenge is to be better every day

The whole point of #raiseit challenge is to be better every day. Better than you used to be yesterday and better than your opponent has been in the latest video they submitted at the official website of the RaiseIt challenge. It’s also not bad if you’re pretty skilled in football and know some cool tricks to impress those who watch your videos.

That is, because RaiseIt challenge from PokerStars basically builds on football tricks. Whenever you see something cool and think “hey, it was okay but I can do better”, that’s when you enter the RaiseIt challenge. Of course you really will have to top the “opponent’s” video and show something new. I personally wouldn’t put too much money at online sportsbooks in Brazil on my video topping any videos from Neymar, but oh well, who knows…

The very first video for the RaiseIt campaign was from Neymar Jr, who challenged his compatriot and football legend Ronaldo Luiz Nazário. The former striker accepted it and topped Neymar’s video with an awesome shot to a moving car, for which Neymar had another awesome reply. Now we are waiting for Ronaldo’s new RaiseIt challenge video and hope to see others joining the challenge to make it as successful as the ice bucket challenge used to be.