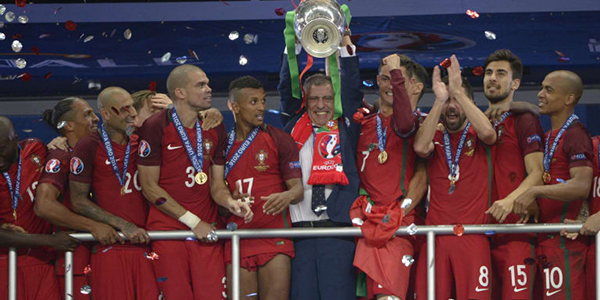 Fernando Santos, the man that guided Portugal to glory at EURO 2016, insists he won’t get sentimental when picking his final 23-man squad for the 2018 World Cup in Russia. The only player that has a guaranteed spot in the team is none other than the captain – Cristiano Ronaldo.

Only players with great form will be considered for Russia

Portugal made history nearly two years ago when they lifted the Euro Cup title in France, but Santos has issued a warning ahead of the upcoming 2018 World Cup that some players who have participated in the Euro 2016 might not find themselves on the plane to Russia.

Even Eder (full name Ederzito Antonio Macedo Lopes), who scored the only and winning goal in the Euro 2016 final against France, could miss out on participating at the upcoming tournament, online sportsbook news report. Santos has also added that other players would not be considered due to “sentimental reasons,” but, like always, it’s rather down to their current form for their club sides.

The Portuguese boss named some of the stars that were present at the Euros two years ago who could possibly watch the 2018 World Cup action from their sofas at home. Real Madrid’s superstar Ronaldo – who holds the record for most caps (149) and all-time goals scored (81) for his country – is the only man on the final 23-man list whose place is indisputable.

“There are several players who were in France that, for several reasons, wouldn’t be now. Vierinha, for example, is having a good season and, at present, is out of the squad. There are other cases, such as Gelson and Bernardo, who weren’t in France. I can’t be sentimental to the point of picking players because of what they did (at EURO 2016). I know that picking the final 23 is like doing a puzzle. But there is only one unquestionable, which is Cristiano Ronaldo, I will say that, yes, some other names are almost guaranteed to be in the final 23,” stressed the 63-year-old manager.

(For more info about the online betting site, check out our Bet365 Sportsbook review.)

It’s right to assume that they might clear their group and reach the knockout stage of the competition, but we’re not willing to bet with online sportsbooks in Portugal they’ll be able to replicate the success they enjoyed in France two years ago.

Ronaldo is still one of the two world’s best players – alongside Messi – if not slightly better this season, but he recently turned 33 years of age and his form has been dwindling for Real Madrid in recent years, so Portugal may be knocked out before reaching the semi-finals of 2018 World Cup in Russia.