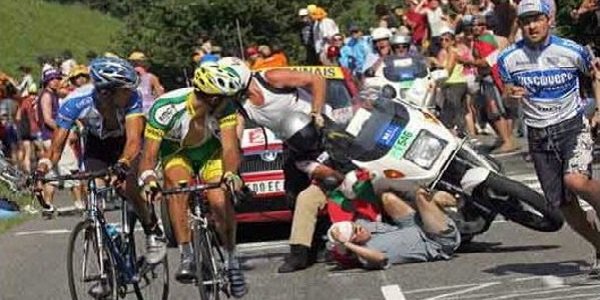 In 2015 the official broadcasters of the Tour de France will be France 2, France 3 and Eurovision.

The Tour de France is such a popular cycling event that not only are people ready to carry out online betting on their favorite cycling teams but journalists also become stark rivals to broadcast the stages. At the beginning of The Tour de France, L’Auto, a newspaper company and organizers of the tour was the the unrivaled newspaper covering it.

If L’Auto decided to organize a race they themselves would cover, it was in a bid to up sales and save the newspaper from possible closing down. At the time, L’Auto’s editor Desgrange, had exclusivity in broadcasting in order keep the profits for the newspaper.

It was only in 1921, that 15 press cars were allowed to share the broadcasting of the Tour de France stages with regional and foreign reporters. At first, just a couple of days before The Tour, audiences could enjoy cinema newsreels.

Then in 1929, the first live radio broadcast from Radio Cité, using telephone lines, with Jean Antoine and Alex Virot on behalf of the newspaper L’Intransigeant. With the use of a recording machine in 1932, cyclists were recorded as they crossed the col d’Aubisque in the Pyrenees on 12 July. The sound was later transmitted.

Then came the first television pictures broadcast systematically transmitted a day after a stage. The national TV channel, which remained a state monopoly until 1982, used two 16mm cameras, a Jeep and a motorbike. Trains or planes would transport the recordings to Paris, where the film was edited and shown the day after.

On 25 July 1948 time Tour de France finish the Parc des Princes in Paris was broadcast live. This is the second sport to be shown live in France. , was the finish at. The Belgian cyclist, Rik van Steenbergen, finished first in the 340 km stage from Nancy.

While the first live coverage from the roadside took place from Aubisque on 8 July 1958. In 1962, ambitious broadcasters envisaged showing the whole race live. The project fell through after editors objected, afraid of the competition.

Later a concession was made allowing the first live report in 1963 to take place. Robert Chapatte, an ex-cyclist, was the unique commentator that year. In following seasons an analyst accompanied him on the mountain stages. Later a commentator joined him, on a motorbike, riding behind the competitors.

President Francois Mitterand of the socialist persuasion then allowed private broadcasters and privatized the leading television channel to also partake in commenting and broadcasting on the Tour de France . TV channels began competing for broadcasting rights. The broadcasting fees accounted for 1.5% of the budget in 1960.

Over the years, the broadcasting fees represented contributions amounting to 1/3 of the Tour de France budget, by the turn of the century. That was not the only thing that increased. Broadcasting time also increased, as channels waged a fierce battle to obtain the rights. Antenne 2 and FR3, later renamed France 2 and France 3, the two largest state-owned channels won more coverage over their competitor, TF1.

Even today these two stations still hold the monopoly on domestic rights, furnishing pictures to broadcasters worldwide. The broadcasting of the tour has become a major affair. The two stations mobilize a staff of 300 to cover the tour as well as “4 helicopters, two aircraft, two motorcycles, 35 other vehicles including trucks, and 20 podium cameras”.

How it works is that the domestic television covers the major stages of the Tour, which includes mountain cycling stages. A survey of the day’s route starts from the middle of the morning interviews along the road, discussions of the difficulties and tactics ahead, and a 30-minute archive feature.

Then, up to the early evening the biggest stages are shown live from beginning to end. The broadcast normally ends with cyclists being interviewed and other features are highlighted. They include an edited version of the stage, in the presence of a team manager following and giving riders his advice from his car.

The Radio, especially the national news channel, France Info, giving updates all day on the races. Meanwhile, other stations provide continuous commentary on long wave. Other countries also broadcast the Tour. Among these is US radio station NBCSN, who has been doing so since 1999.

Fans of Tour de France, including those bet on sports in France have been relieved that their favorite sports team members have been dope-free, for the most part, after systematic unparalleled inspections to catch possible drugged cyclists, since 2009.

That year, global popularity clearly increased with a global total audience of 44 million recorded for stage 20, from Montélimar to Mont Ventoux in Provence. The Tour de France became the 12th most watched sporting event in the world in 2009.