The Future Stars of the NFL Are Coming (Part I) 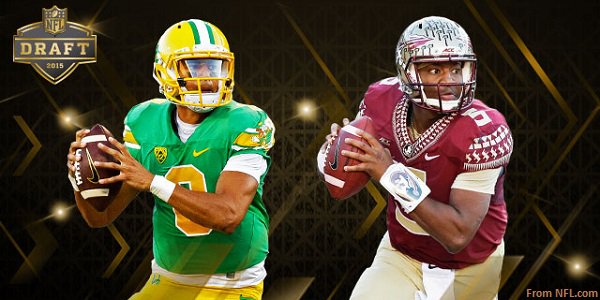 Though the class is not as strong as it was three years ago, the first two teams could pick a quarterback in the 2015 NFL draft, according to experts.

Time has come for the NFL franchises to use their picks and select players from the college class of 2015, so let’s have a look at the first round of the draft and see who might go on the first day on April 30, Thursday. If there will be no trades affecting, last year’s most miserable team, Tampa Bay Buccaneers chooses first, while the last pick of the first round belongs to Super Bowl winners New England Patriots.

According to pundits, this year’s class is far from the strongest in the history of the NFL, but as you’ll never know who would be able to adapt to the demands of professional football most effectively, you might avoid a miss by keeping track of the newcomers. Though the US gambling laws vary from state to state, the NFL draft is a major event for everyone who bets on sports in the US, and it is the most important one regarding American football during its half year long offseason.

It is almost certain that the Bucs will use their 1/1 overall pick to acquire Florida State quarterback Jameis Winston, and that is why online betting sites pay just a few coins after a large wager placed on him going first. There were speculations about a possible trade and some say that Marcus Mariota, who doesn’t have the off-the-field issues like Winston, would be a better choice, but it seems that Tampa Bay’s front office sticks with the 2013 Heisman Trophy winner.

That might leave the Titans, who were the AFC’s weakest team last season, with Oregon quarterback Marcus Mariota, if they also opt to pick a QB in the first round. It happened last time in 2012 that both of the first two overall picks were spent on quarterbacks, when Indianapolis drafted Andrew Luck and Washington took Robert Griffin III. There was a particularly strong class of quarterbacks back then however, that included Russell Wilson too. If there is a trade, USC defensive lineman Leonard Williams could go second instead.

Jacksonville can go for the best available player with their third overall pick, and the favourite to that is Dante Fowler, Jr., who can help the Jaguars either as a defensive end or an outside linebacker. If still available, the River City franchise might choose Leonard Williams instead, but the most recent mock drafts prefer the Florida Gators’ pass rusher, who considered as a better fit to Bob Babich’s defense.

If Leonard Williams is still on the table, the Raiders should take him. Not just because he will be the most valuable player accessible, but because Oakland could satisfy their need for wideouts later on during the draft. If the California club opts to pick a wide receiver anyway, they could either choose Amari Cooper from Alabama or Kevin White from West Virginia, according to
online sportsbooks in the US.

Vic Beasley, a defensive end/outside linebacker coming from Clemson University, was one of the stars of the 2015 NFL combine, and therefore most of the pundits estimate him as an early pick. However, the Redskins could rather decide to add a weapon to their attacking unit of course, and in that case Amari Cooper could be their man, if he is still on the market.

The Jets desperately need a franchise quarterback since Mark Sanchez left them last year – many people will say that they also lacked a franchise QB when the former USC man was still on their roster – so, if available, they will probably go for Marcus Mariota. If the Oregon signal-caller is not on the table, they should take Amari Cooper or Missouri defensive end Shane Ray.

The Windy City club has a lot of problems, including the lack of people on their depth chart who can catch a ball. Thus Kevin White seems like an obvious choice for them, according to
gambling news, however they could use a defensive player as well, like Washington Huskies nose tackle Danny Shelton.

The Falcons will almost certainly choose a pass rusher, and for weeks it seemed that they will use their pick to acquire Randy Gregory from Nebraska. However, Gregory not just underperformed at the combine but tested positive for marijuana too, and that is too much from a projected top ten pick. This leaves Atlanta with Missouri’s Shane Ray, or Kentucky’s Alvin Dupree.

Although some deals and surprises always occur, and the move of teams can influence the projected order until the last seconds, if there will be no big trades, this list can be a useful assistance if you’d like to bet on the draft, or just want to prepare for the event. The next part will cover teams with picks from 9 to 16 featuring Super Bowl winners like the New York Giants and the New Orleans Saints.