Illegal gambling that’s under protection of high-ranking Police officers in Russia is a scandalous theme for journalists, and is gathering momentum with new twists daily. 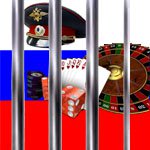 New names have been revealed in the infamous scandal of underground casinos, running under protection of top-level Russian Police officials. After a series of illegal casino raids, FSB (Federal Security Service of the Russian Federation), arrested three top ranking police officers inside the Moscow Region Directorate for Combating Economic Crimes headquarters in Moscow. FSB investigators have already officially stated that the “general patronage” in this case was carried out by the Chief Prosecutor of Moscow Region.

According to the FSB, illegal gambling facilities were set up in fifteen cities of the Moscow Region. Altogether 35 raids were carried out in connection with this case and 1200 slot machines, accounting records and more than 60 stamps of various “one-day” companies were ceased in the gambling halls. According to preliminary data, monthly income from criminal activity of the gambling network ranged from five to ten Million USD.

Under current Russian gambling laws all forms of gambling, including online casinos, poker rooms and live casinos are illegal. The only exception within the law is the permission of licensed casinos in a limited number of regions.

The police headquarters, where the raids were carried out, didn’t comment on the detention of its staff. Yet, as sources close to Investigation Committee stated – “these law enforcement officials are also suspects in the case of providing protection to underground casinos”. This case falls under Article 159, (fraud), of the Criminal Code. Investigators consider Ivan Nazarov, a local entrepreneur, to be the mastermind and organizer of the criminal network which operated the illegal casinos.

Nazarov’s attorneys are confident of his innocence. According to Mr. Dobrovinsky, the accused’ legal counsel, Nazarov is an innocent victim of a war between the Investigation Committee and Prosecutor’s Office. He was repeatedly pressured during previous investigations to testify against Alexander Ignatenko, Deputy Chief Prosecutor of the Moscow Region. “Mr. Nazaro is being used in this long lasting vendetta between the Investigation Committee and the Prosecutor’s Office,” Nazarov’s attourneys stated in a press release.​