Saint-Petersburg is the Real Capital of Poker Tournaments in Russia 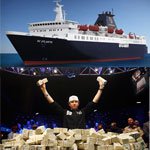 Saint-Petersburg, the architectural wonder of Russian royalty, has emerged as the true capital of high stakes Poker Tournaments in Russia through the clever use of deluxe floating ferry casinos.

Seventy years of living under Communism made every Russian an expert strategist on ways to circumvent oppressive government laws. If a loophole or a grey area of any law exists, give a true Russian just ten minutes to uncover it. Sherlock Holmes is just an amateur. This was how the idea behind the floating deluxe casinos of Saint Petersburg was born. Since Russian poker rooms are almost all closed, this event will draw lots of attention.

The city of Saint-Petersburg, where gambling is illegal, is strategically located close to international waters, and thus outside the jurisdiction of the peculiar Russian Gambling Laws. The Russian Masters Poker Cup in late January 2011 was supposed to take place on the deluxe Atlantis casino ferry. However, Mother Nature did not permit the ferry to depart due to a sudden storm, and the opening event had to be postponed. After weighing all the pros and cons, tournament director RMPC Dmitri Ganin decided to move the landmark tournament to April. With all dates confirmed, the preliminary schedule was posted outlining the details and signup dates.

The event is bound to draw a lot of press attention in Russia, where people who opposed laws usually received a 1 way ticket to a 10-20 year vacation in Siberia and not in a 5 star casino. The tournament will take place from April 17 to 24 aboard the Atlantic floating casino. Every evening the ferry will depart from Vasilevsky Island toward international waters and return the next morning.

The floating casino is more than just a tournament site; it’s also a deluxe hotel with over 100 rooms so players can rest in style during breaks. Besides poker the floating casino has a gourmet restaurant, a nightclub, karaoke “Jelsamino”, Vegas style nightly shows as well as a proper casino.