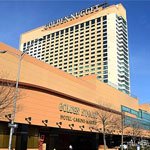 Just a week after Borgata collected the first online gambling license awarded in New Jersey history, Golden Nugget casino joined its rival in the race to set-up the first real money online casino in America. In fact, it’s looking increasingly likely that many of the land-based Atlantic City casinos will share that title, as soon as the infrastructure goes live in November.

There is one key difference with the Golden Nugget offering, however. Unlike the other Atlantic City casinos, they are not having their online casino managed by an experienced company. While others have enlisted the help of companies such as bwin, Golden Nugget looks set to run all their online and mobile casino services in-house.

They have, however, bought in Bally Technologies to assist, but the casino itself will be branded and run completely by Golden Nugget.

Since the changes in American gambling laws that allowed individual states to regulate their own online gambling markets, Nevada and Delaware have joined New Jersey in legalizing the activity, with California and Texas due to follow in 2014. New Jersey, however, will be the first state with an online casino, which will be able to go live on November 26th, providing there are no hitches along the way.

Of the 10 remaining casinos in Atlantic City, 8 of them have already put in place agreements with online gambling companies to launch their services. The 4 Caesars Entertainment casinos have teamed up with 888 Holdings, the Tropicana Resort with Gamesys, Trump Taj Mahal with Ultimate Gaming, while the Trump Plaza Hotel and Resort has joined up with Betfair.

That leaves just two more casinos who have not engaged the services of a professional online company. The Revel Casino Hotel and Atlantic Club Casino Hotel will both be unlikely to turn down the chance to open an online casino, however, considering the financial strangulation both are feeling with the drop of revenues across Atlantic City’s casinos.