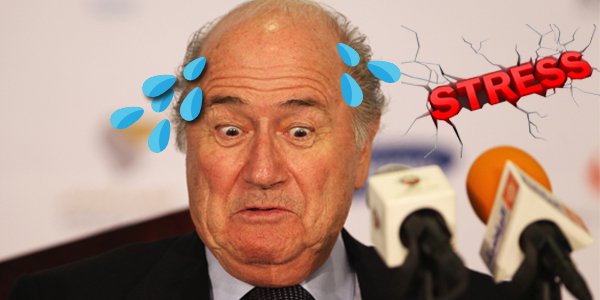 The cynical and mercenary use of his age and a supposed “stress related” illness that took him to hospital for a few days merely underlines Sepp Blatter’s guilt and how worried he is about facing jail time for his inherently corrupt stewardship of the most popular sport on the planet.

Sepp Blatter’s guilt is now so manifestly evident that his continuing refusal to acknowledge that the vast majority of us think he’s done so much damage to football he should be jailed, water-boarded and then taken out and shot is becoming almost endearing. Almost.

Following a stay in hospital for a “stress related” illness, where he had a medical issue installed for later use in court as and when sentencing rolls around, the 79 year old Swiss now claims to have been in a far worse state of health than was previously thought, thought before Sepp Blatter’s guilt arose publicly.

“I was close to dying.” said the former President of FIFA, apparently gambling news coverage of this statement will actually make people believe this manifestly self-serving load of old cobblers. Somewhat startlingly he continued; “I was between the angels who were singing and the devil who was lighting the fire.”

Given Sepp Blatter’s guilt one can only assume the angels were singing so they wouldn’t have to talk to the man who has done more to damage football than US bombing did to Iraq, and I seriously doubt, from his description, that The devil were really present at all. It takes a special sort of arrogance to think Satan will start an individual fire personally for you, doesn’t it?

He was probably just burning his Aston Villa season ticket.

And lets be honest here, Satan won’t be in a hurry to accept Blatter into the dark realm of the underworld because having an aging bald swiss man constantly harassing you about how often you get elected and asking how he can become a candidate would get irksome even for Beelzebub himself. Worse still, with Blatter you can’t guarantee he won’t win.

“At some stage the body says ‘no, enough is enough’.” Said Blatter of his rather obviously faux malady, which begs the question; “Why aren’t you dead, Mr. Blatter?” We notice they sent you back apparently not in a hurry to have you around. It also strikes me as a tad odd he nearly died at all given he’s serving out a 90 ban from involvement with football, something his lawyer said FIFA would like to extend to a lifetime ban for both Blatter and his acolyte Platini.

Of course the whole “stress-related” illness could be real, although even the most rabid gambler that likes to bet on sports in the UK wouldn’t back it to be, but even if it were, it would merely be a sure sign of Sepp Blatter’s guilt. Only the hugely guilty get more nervous when the reins of power are removed from them, their ability to hide evidence of their massive wrong-doing significantly curtailed, and then they panic, or have a “stress-related” illness.

Sepp Blatter’s guilt might well be stunningly obvious either way but that doesn’t mean the mealy mouthed maestro of willfully missing the point won’t squirm his way out of the legal difficulties he finds himself in, expensive lawyers can work wonders, but just how much damage has it done to his dynastic desires? And will we never get to see his Ceausescu moment of realization? Such a shame.

Platini As Gaga As Blatter Pretends

”The throne is mine!”

His enthusiastic apprentice Platini is ironically as mentally addled as Sepp Blatter’s guilt is making the fat Swiss pretend to be for the world’s press. He still thinks he can become the next FIFA president, continuing the Blatter lineage, but can someone so tainted, so obviously really take over governance of world football? One would hope not, but then Sepp Blatter’s guilt writ large didn’t stop him getting re-elected, did it?

Now unfortunately UK gambling laws do not allow wagers on human suffering so you can’t actually place money on whether or not Sepp Blatter is actually going mental or is just faking to gain sympathy from the judges, however you can head on over to Bet365 to have a flutter on who you think will be next to preside over FIFA and all its vast temptations.

Pretty much the only thing you can be sure of regarding the worthwhile and luminous candidates that will remain once the great FIFA purge of the pilferers is over, is that if they aren’t corrupt before they get the job, they will be by the time re-election rolls around. Perhaps then someone already corrupt would be best. They should offer the job to Satan, perhaps he and Blatter could swap.