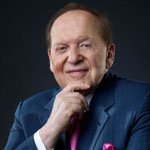 With plans to eradicate online gambling in the US, Sheldon Adelson, chairman of the Las Vegas Sands, plans to introduce a draft of federal legislation to the US House of Representatives in 2014.

The three-page bill titled the “Internet Gambling Control Act” seeks to alter the US Department of Justice’s 2011 opinionon online gambling, which considersthe 1961 Wire Act to apply only to sports betting.

While the proposed draft seeks to plans to shake up US gambling laws, it is still very much a work-in-progress and some have accused the draft of the “Internet Gambling Control Act” to be full of gaps, inattention to detail and sloppy phrasing.

It’s obvious that Adelson’s interests lie in the concerns that internet gambling in the US would affect his own bricks-and-mortar casino revenue, however the bill cites other reasons against online gambling, including fraud, money laundering and terrorism financing, among others.

Adelson is calling for the Wire Act to be redefined to include poker and casino games, along with the current probation of any sporting event or contest.

This new proposed bill is testimony to Adelson’sdetermination to spend “whatever it takes” to eradicate internet gambling.

At present, the bill is unlikely to pass in the House of Representatives, especially since online gaming has already been permitted to operate in three US states, with others looking to join shortly.