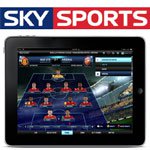 The popular Sky Sports iPad app allows punters to follow the football matches live and place bets under British gambling laws. Just in time for the start of the new Premier League season, the application has been updated delivering new functions and enhancing already existing ones.

The new version allows football fans to be on top of the game with in-depth statistics and information about teams, players, and the matches, building on the rich experience provided by the Sky Sports’ extensive coverage of the Barclays Premier League 2012-2013.

All the information is located in the brand new “Football Match Centre” inside the iPad app, which comes free to Sky Sports customers. The new feature will follow all matches live, and will provide fans of online sportsbooks in United Kingdom with the following benefits:

Director of Sky Sports Digital Media, David Gibbs, told United Kingdom gambling news: “We know that Sky TV customers want the latest stats and facts about their favorite teams and players, and the new Football Match Centre within the Sky Sports for iPad app does just that.”

He went on to add: “With over half a million downloads since launch, we hope that the addition of a football second screen experience to the iPad app will continue to excite fans, providing an intuitive and innovative way to follow the match included as part of their Sky Sports subscription.”

The new app experience is scheduled to be extended to accompany Sky Sports’ Champions League football coverage. Further along second-screen experience for golf fans is planned to precede the Ryder Cup in September.