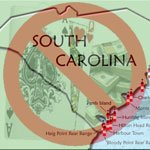 The American gambling law in South Carolina bans cash games, regardless if they take place in a private home or not. The court said: “If money is exchanged in any form, it is illegal.”

The court case stems from a raid back in 2006 on an American poker room held in a private home that saw the arrest of 25 participants, each of whom was accused of illegal gambling. The authorities found several thousands of dollars in cash during the raid.

The Court ruled that the organized game in 2006 was advertised online. The court decision also added: “even a private home can be considered a place of gaming.”

Commenting on the ever-ongoing skill versus luck consideration, the South Carolina Court found that the debate carried little weight. Because money changed hands, State Law on gambling had been broken.

If the coming change in the gaming regulation after the Reid-Kyl proposal is accepted by the US lawmakers it may legalize online poker but ban all other forms of online gambling in the USA except for sports betting.

If the Reid-Kyl proposal goes through the US legislation, South Carolina will have to decide whether to allow intrastate online poker games until a given deadline. If the state legislation also passes the bill, real cash games on the internet will become a reality.

However, real-money poker games at home or cash games held in public will remain illegal as the proposal only concerns the online activities.