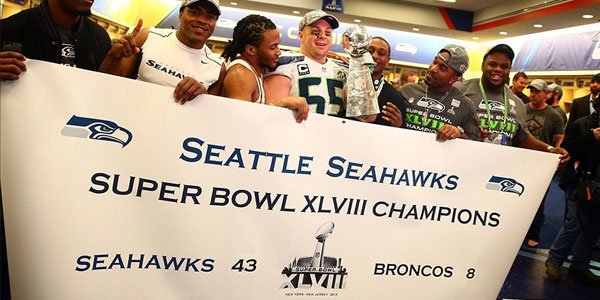 The Super Bowl XLVIII is behind us, but already it’s time to look into the future and prepare for the next season’s big match.

The celebrations have already begun in Seattle and across the world, after the Seahawks crushed Denver Broncos 43-8, despite being two-point underdogs at the majority of online sportsbooks in the United States. But, the other 31 NFL teams have already started their preparations to knock the newly-crowned champions off the throne.

Some bookies operating in line with American gambling laws have already gone ahead and prepared betting lines on the upcoming 2015 Super Bowl to be held in Arizona. Naturally, Seahawks are favorites to repeat the success, despite the fact that it’s almost 10 years since New England doubled up as champs back in Super Bowl XXXIX.

The now reigning champs, Seattle Seahawks are 9/2 favorites to repeat their success, but next up are San Francisco at 15/2. And Seahawks will first have to hold off them in the extra-competitive NFC West Division, before making it to the next Super Bowl. Naturally, the team to finish first in that division will probably be one of the top seeds in the conference, and thus enjoy a short-cut to the Super Bowl XLIX.

As for the favorite from the AFC – it’s Denver Broncos with 8/1 odds for those wishing to bet on sports in the United States. Their devastating loss on Super Sunday will surely act as a motivating force for the upcoming season. There have been previous examples of comebacks: Buffalo Bills made an appearance in three consecutive Super Bowls (1991-1993) after losing out in 1990.

The fourth favorite team to take the next Super Bowl crown are New England Patriots with 14/1 odds. The boys have a real shot at winning provided Bill Belichick and Tom Brady stick with them. If only it was 2000s when Patriots really shined.

Is there life after Top 4?

Next up are Green Bay with 16/1 line to make a comeback to Super Bowl, after they’ve beaten Pittsburgh 31-25 back in Super Bowl XLV. The last season has revealed the importance of Aaron Rodgers to the team, well, if he remains healthy for the upcoming one – the Packers should have no problem making a run for the title. And yes, they’ve got 2013 Offensive Rookie of the Year, Eddie Lacy, so things might just swing their way.

New Orleans follow suit with 18/1 odds to make a Super Bowl appearance, their last one was in 2009. However, their situation is pretty similar to the Packers’, the Saints need Drew Brees up and running in order to have a shot at the title. Another important thing for New Orleans is mastering away play, which hasn’t really gone their way last season.

Atlanta Falcons are 25/1 favorites to appear in the next Super Bowl. The last season was a catastrophe with 4-12 overall result, but they do have a record of four straight winning seasons and three appearances in playoffs. Tony Gonzalez has finally decided to call it a day, after 17 excellent seasons in the NFL, but there’s plenty of offensive talent amidst Falcons. They do need to fix the defense, however, 28th ranking in the league is not a stellar result.

The NFC South division could provide a traffic jam of contenders for the Super Bowl. Whichever team makes it to the top of the division, will have the most chances to win it all. Carolina Panthers are currently 25/1 to make it to the Super Sunday, but no South team has won back-to-back titles, since 2002. However, statistics is not our concern, we’d rather watch the action on the pitch.

Philadelphia Eagles, Cincinnati Bengals, and of course, Indianapolis Colts have the best chances to win the Super Bowl XLIX than any other representative of their respective divisions. All three teams were given 25/1 odds by some online sportsbooks in the USA.

The New York Giants and the Dallas Cowboys were given 33/1 odds, while Arizona Cardinals got the same 33/1 line, and if they succeed they will become the first ever team to play in Super Bowl at home.

It remains to be seen who will make it to the 2015 Super Bowl, but one thing for sure – we can expect an exciting season, full of hot action on the football pitches, and rewarding odds at land-based and online bookies across USA and worldwide.