US tax authorities claimed around $10 million from the WSOP final table. 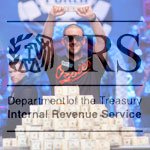 Las Vegas based tax consultant Russ Fox did a calculation on the World Series of Poker main event final table, held last week at the Rio.

Greg Merson’s first prize was $8.53 million – before taxes. Tax consultant Fox calculated how much the 24-year-old WSOP winner should pay up by the current taxes under US gambling laws. According to estimations, the IRS would take away $3,693,526 in federal and state taxes, reducing Merson’s winning to $4,838,327. Still not bad.

There are no news how much taxes Merson is to pay on his expensive WSOP winner bracelet.

Runner up Jesse Sylvia’s before tax $5,295,149 will be about $2 million less after the state claims his own share.

According to US gambling news calculations, the US tax authorities will claim around $10 million the US alone from the US players of the WSOP main event final table held last week.

Hungarian player Andras Koroknai, the only foreigner of the nine players of the final table, will be allowed to keep most of his $1.6 million winnings.

Merson is a true online poker player, claiming to have played over seven millions hands over the internet. He is the first player ever to win both the Main Event and the Player of the Year title, awarded since 2004.