The Basic Rules of Ice Hockey 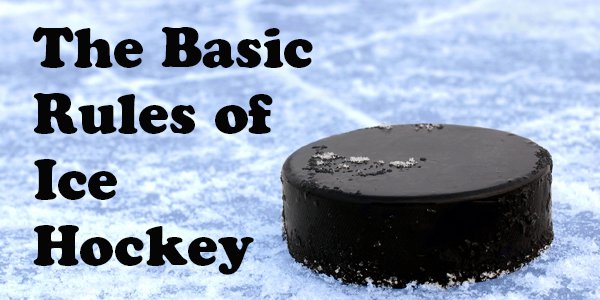 Interested in betting on the NHL but not familiar with how the game works? Look no further than GamingZion’s guide on the basic rules of ice hockey!

US gambling news is filled with coverage of the National Hockey League (NHL) whenever hockey season rolls around, which means that more and more people are becoming interested in gambling on the winter sport. If you’d like to bet some bucks on the NHL but aren’t sure how it works yet, this guide from GamingZion can help you out with the basics.

It is important to note that this particular guide pertains to ice hockey as it’s played in North America. While the rules of ice hockey are generally the same across the world, there are minor differences that exist dependent on the geographical area in which the sport is played.

Ice hockey is played on a sheet of ice enclosed by wooden boards and tall pieces of Plexiglas. It is commonly referred to as ‘the rink’. In North America, the standard size of a rink is 200 feet by 85 feet, as opposed to in Europe, where they tend to be a bit larger.

There are five lines on the ice altogether: two goal lines (at the end of each side of the ice); two blue lines (that separate the offensive/defensive zones from the neutral zone); and one red line in the center.

The rink is then further divided into three zones: the ‘defending zone’ (where the goal nets are located); the ‘neutral zone’ (the middle of the rink, between the two blue lines); and the ‘attacking zone’ or ‘offensive zone’ (where the opposing net is located).

There are three different positions in hockey (Photo: Wikipedia)

Your typical hockey team consists of twenty players altogether: twelve forwards; six defensemen; and two goaltenders. During a game, six of these players—five skaters and a goaltender—can be on the ice at a time. That said, unlimited substitutions are permitted, which means that players can be substituted at any point during play or stoppage of play without an official’s permission. It is also worth noting that except for the goalie, who must stay in his net, all active players can go anywhere they’d like on the ice.

Like most games found on internet betting sites, the rules of ice hockey dictate that the objective is to score more goals than the opposing team. Whoever has the most points at the end of the game, wins.

Every hockey game begins with the faceoff, in which all players are positioned on the defensive side of the puck, and then the referee drops the puck between two of the opposing forwards. The faceoff formation will be used again to resume play whenever there is stoppage in a game. Winning the faceoff is key to many strategies.

Whoever gets the first goal in overtime wins (Photo: Wise Geek)

Each game is divided into three periods. Each period lasts twenty minutes and there are intermissions in between. If the game is tied by the end of the third period, then the game will go into overtime. In overtime, the game ends when the first goal is made. During NHL regular season, the overtime period lasts five minutes with 4-on-4 hockey. In opposition, if it’s during the NHL playoffs, overtime lasts twenty minutes long with 5-on-5 hockey.

During the playoffs, overtime will go on for as long as necessary. During regular season, if no goal has been scored during five minutes of overtime, there will be a shootout. In a shootout, each team will have three shooters, and the team who has the best out of the three shots will win the game.

Players who violate rules regarding body-checking, fights, and other dirty play get sent to the penalty box (Photo: NHL)

You don’t think we’d leave out one of the most important aspects of the game, would you? There’s so much history and so many rules regarding body-checking and penalties that we’ve decided to give it its own article.