The Belmont Stakes Is The Must Place Bet On US Racing 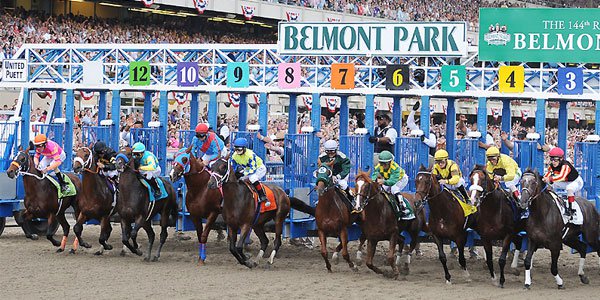 The final race of the Triple Crown rushes away from the gate this weekend as the 149th running of the Belmont Stakes draws the racing world to New York but just which of this fabulous field will win and which should you back if you’re going to place a US racing wager this weekend?

The triad of races that makes up the triple crown ends with the oldest of the trio the Belmont Stakes providing perhaps the most heritage-rich opportunities to bet on US racing, the track perhaps one of the most famous in the world, certainly in the United States and with US gambling laws these days at least providing race tracks the opportunity to wager on the horses it has only gathered in popularity, something that was perhaps a little lacking in the early years of the race held at Jerome Park.

With but a few cancellations, notably 1911 and 1912 after anti-gambling insanity swept the region, it’s been run since 1868, moving to Aqueduct Racetrack in the sixties whilst Belmont was refurbished, and drew its biggest crowd in 2002, which says much for the rise in popularity among those who like to bet on US racing, especially if there’s any chance at all that a new Triple Crown winner will emerge, as occurred when American Pharoah won in 2015 becoming just the 12th horse to achieve the feat.

Bet On US Racing At Bet365 This Weekend

But who should you back in this year’s race? Well as ever we’ll eschew the traditional entrail-gazing that people like to call form and just take a look at the names of the horses and the odds they’re getting at Bet365 before they line up for the start this weekend on the reasonable basis it’ll be as good an indicator of who’ll win as any other, and if you’re going to bet on sports in the US, and a bet on US racing is often one of the most exciting given their razzmatazz, and see which takes our fancy.

Believe it or not, Patch the horse has only one eye (photo: thewildcard.com)

The longest shot of the field, according to Bet365, is the rather dull sounding “Patch” who gets 40/1 and is therefore possibly the worst bet on US racing you could make this weekend, with the ridiculous sounding “Hollywood Handsome” garnering an almost as unlikely 33/1. “Twisted Tom”, who sounds as if he needs colonial irrigation gets 20/1 although anyone in the US gambling news on Monday will be of any of these three winning should probably be put on some sort of watch list somewhere.

Will Irish War Cry Triumph In The Belmont Stakes?

“J Boy Echo” gets 16/1 at Bet365, which frankly sounds as if someone adjusted the name after objections for homophobia, and on equal odds is the bizarrely named “Multiplier” who can only ever be one horse however fast it runs. The rather segue sounding “Meantime” goes at around 14/1 which only sounds mildly better than “Gormley” which sounds like a northern industrial city in need of serious investment, and at 12/1 probably shouldn’t be the bet on US racing you make this weekend.

The inexplicable “Tapwrit” garners 15/2, but the odds only really get tempting at 6/1 for the pompous “Senior Investment”, or the 5/1 shot “Lookin At Lee” which is short a letter if you ask me, but the favorites to win the Belmont Stakes, and probably the best bet on US racing you can make if you’re going to bet on sports in the US this weekend, are “Epicharis” named after a female revolutionary at 4/1 and “Irish War Cry” (‘Mines A Guinness!’ perhaps?) at 3/1 at Bet365. Who’ll win? You can say, just put your money where your opinion is.