The Bookworm Gambler’s Digest: One of a Kind

News >The Bookworm Gambler’s Digest: One of a Kind 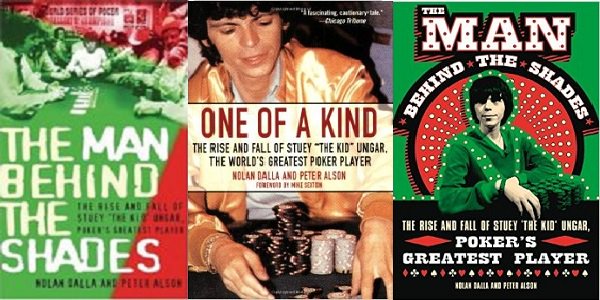 One of a Kind: The Rise and Fall of Stuey ‘The Kid’ Ungar, The World’s Greatest Poker Player is a book that will have you breathless by the end.

If you love books that are gambling, you’ll love this book. And, if you like reading about mobsters and their activities, you absolutely cherish this true story. Nolan Dalla and Peter Alson bring you the gripping drama of a young card playing genius backed by the Mob. Although the events can be predicted, the authors manage to tell the tale so well that there’s no doubt: this is one of the best gambling-mafia books that ever existed. The fact that it’s based on a true story only adds to the genius of this book.

Let’s talk a bit about the main character of this great read. Stu Ungar was born in New York and quickly became one of the most well-known card players at the time. He excelled at more than one game: poker, blackjack and gin rummy were his favorites. He was unbeatable at them. He was also the second person to have won three World Series of Poker bracelets consecutively. He won the Super Bowl of Poker three times, too. He was the star of US poker rooms and was a poker winner more times than anyone else in his time. He started gambling early; his father was a loan shark (and we’re wondering why he ended up being backed by the Mob?) and he also owned a gambling joint.

Accounts talk of how much of a bad winner he was. He was aggressive and arrogant towards others who he sensed couldn’t play as well as he did. He was a real brat. He was so good at card games that he beat even the pros; soon, nobody wanted to play against him. Accounts show that he had drugs problems (that could also affect his personality in a negative way.) He started on cocaine to keep him vitalized for his tournaments. After his marriage and soon after that, the suicide of his adopted son, Richie, his drug problem worsened to a point where his friends and family said they’d be surprised to see him live to his 40th birthday.

He was the classic example of winning always on the professional side of life with all his WSOP victories, but losing control of his personal life. He had a severe gambling problem to top off his drug abuse, too: he would gamble away his winnings at the blink of an eye. His drug problem spun so out of hand that, as Peter Alson wrote, he wore blue tinted sunglasses to “hide the fact that his nostrils had collapsed from cocaine abuse.” But, there are no US gambling laws regarding the usage of drugs while gambling, so he went on with this self-destructive behavior right until his death.

Strange circumstances of a strange death

It is a well-known fact: Ungar was backed by the Mob. He has had a business relationship with one of the most famous mob enforcers, Anthony “The Ant” Spilotro. And by having a business-relationship, they had a shady, paranoid connection. Once, Ungar was seen going over to Spilotro’s house with a gun in his waistband. Spilotro beat him half to death because of the disrespect Ungar demonstrated by bringing arms to his home. In other words: they most definitely weren’t the best of friends. At all. It is not a great big surprise then, that his death was surrounded by unusual circumstances.

In November, 1998, Ungar checked into a cheap motel on the Las Vegas Strip. Two days later, they found his body. At first, they thought it was an overdose, but the autopsy only showed small amounts of drugs in his system. There were no drugs found in his motel room, either. In other words, he couldn’t have died of snorting too much cocaine. The medical examiner stated that his heart probably simply gave out after years of drug abuse. When he died, he had no properties in his name, “only” the USD 30 million he won during the WSOP tournaments. I wonder how well he would’ve played poker on mobile casinos, in modern times. Don’t you?