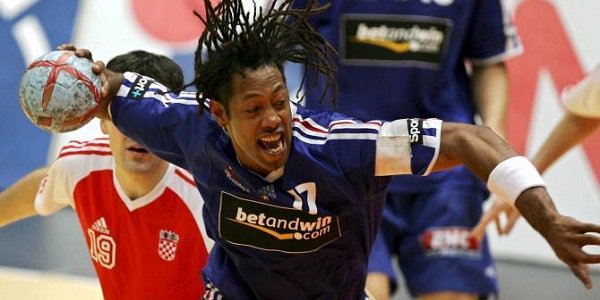 GamingZion presents Jackson Richardson, a player with a unique charm inside and outside the handball arenas.

For the handball fans in the 80’s there did not seem to be a dilemma concerning the best player in the world. However, as gambling news report, for those in the nineties there were several candidates. One of them certainly was Jackson Richardson,

• Turbo in attack and defense
• Flagbearer at 2004 Olympics

the central back whose appearance in the handball halls could not let anybody indifferent. His incredible technique of controlling the ball, the variety of shoots in his repertoire, and the easiness with which he played on the court are considered according to many to be a perfect combination of brute power and great talent.

Born on the French Island of Reunion on 14 of June 1969, Richardson started playing handball from the age of six. In 1988 on the final day the National 3, he scored seven goals in front of the coach of the French national team and was very soon transferred in some of the biggest handball clubs in France at the time. He signed up in the beginning for Paris-Asnieres in 1989 but changed soon to the team of OM-Vitrolles. In Marseille, the broader audience could see Jackson Richardson in the light we used to see him in the next decade and a half. In attack or in defense he seemed to be tireless. The shoots from distance, the rolls, and the top spins were just part of what Richardson’s attacking repertoire. In defense, his play as a “joker” in the 5-1 formation was a real nightmare for the opponent’s attack. It was this defensive role of his that made him one of the best ball stealers in the world of handball.

With the team of OM-Vitrolles Richardson became champion of France in 1994 and 1996, winning also the Cup of France in 1993 and 1995. During this period he establish himself not only as a real commander in OM-Vitrolles, but also in the French representation where he played during his carrier more than 400 matches, scoring 787 goals. As online sportsbooks in France report, with the French national team he won the bronze medal on the Olympic Games in Barcelona in 1992. However he shone three years later on the World Championship in Island where he proved to be the soul of the Tricolores which won the golden medal in the final against Croatia. This year Jackson Richardson was proclaimed to be “IHF Handball player of the year”, an awards which inscribed his name deeply in the handball history.

Outside France: Jackson Richardson’s career in Germany and Spain

After so many awards and recognitions, France seemed to be not as big challenge for Richardson as the powerful Bundesliga. He still missed the greatest title in the club handball: the one from the champion’s league. He moved to the team of Grosswallstadt, in what seemed not to be the best option for a player of his rank, since the project of the German team did not gave the results it was expected to. Richardson stayed there for 4 years. In the year 2000 he announced his departure from the Bundesliga, moving south. His next destination was the league that was probably the best in the past decade: the liga ASOBAL. His new team: Portland San Antonio.

When he came in the team of Pamplona he was already mature enough to be treated with great respect by everybody in the club. He was also in the years where he could show the best of his handball knowledge on the court. And he did it! As online gambling news in France report, he first fulfilled his long desired wish: to win the Champions League. In 2001, Portland San Antonio became the new champion of Europe. In the same year, Richardson also became world champion for the second time with the French national team. In an extraordinary difficult competition in Spain, with handball powerhouses such as : Ciudad Real, Barcelona, Ademar Leon or the always dangerous team of Valladolid, Richardson also leaded the team of Portland San Antonio to two league titles in 2003 and 2005. As he was going down the road full of glory, he returned back to the team of Chambery in the LNH where he played for three years. He retired in 2008, enjoying the status of handball legend in France. He is the only handball player so far that was flag bearer of France at the Olympic Games. A fact which speaks enough about the greatness of this handball master.