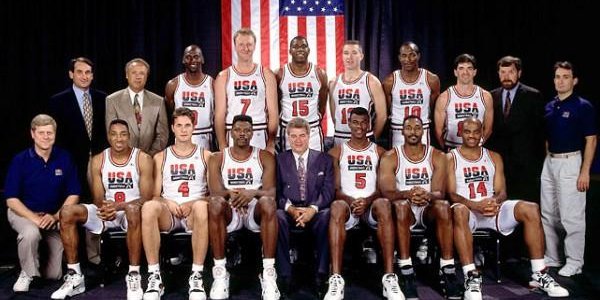 The NBA stars that went to the games and represented their country were the cream of the crop, the best of the best, and in 1992 they showed the world what that meant.

In 1992 the Olympic men’s basketball team walked away with the gold medal having won all their games by an average of nearly forty points. This would have been a massive shock given the results of past Olympic teams from the US made up of college athletes, were it not for the fact that in 1992 the US men’s Olympic basketball team was made up of the biggest stars in the NBA. They called them the Dream Team and never has a name been more deserved.

Prior to the 1990s the US had been at a bit of a disadvantage as other nations fielded professional players from other leagues whilst the US was prohibited from doing the same. This imbalance was finally corrected and the NBA was approached to supply players for the team, something they were initially unenthusiastic about, after all American gambling laws prevented people wagering on the Olympics. The US sporting world regularly fails to appreciate global sport’s size and attraction, this was no different.

Michael Jordan was approached to anchor the team but it wasn’t until many of the other famous faces had agreed to play that he finally signed up, and even then he refused to be the public face of the team with Magic Johnson and Larry Bird co-captaining this team that included 11 hall of fame inductees, and just between Johnson, Jordan and Bird represented 10 championship wins, 7 NBA finals MVPs, 8 regular season MVPs and 6 regular season top scorers from the previous 13 seasons.

This wasn’t a team, this was a winning machine. Pippen, Stockton, Malone, Ewing, Mullin, Robinson and Barkley were joined by Drexler and the only non-professional on the team, Christian Laettner of Duke University. The list reads like a who’s who of basketball at the time and that college kid beat out Shaquille O’Neal for that place on the court. These then would be the men who took basketball’s NBA to Barcelona.

A Team Unlike Any Other Before Or Since

Of course picking the very best players doesn’t mean you’re going to be able to meld them into a winning team, especially not with all those huge personalities clanging around together. The coach had to be someone who could handle big stars and keep them out of the gambling news. There was only one choice, Chuck Daly and this posed a bit of an issue straight away since he’d spent a good few seasons setting his defense to infuriate Jordan. Thankfully the two found mutual respect through golf and an understanding of the game.

This was important because at the start the Dream Team had a bit of a nightmare. Whether you believe they just couldn’t play together first time out or that Daly threw the game to show them they COULD be beaten, when the Olympians played a bunch of college kids… they lost. Of course they soon bounced back and hammered these opponents the next day, but in the history of coaching no initial defeat ever brought a team closer together.

They did still have to qualify and that meant playing in the Tournament of the Americas in Portland, Oregon, which began to give them some indication of where all this was headed. Opposing teams were in awe of playing against their heroes and scenes of players taking photos from the bench during the game represented just the start of the dream team fever that would sweep the world of basketball and that of the Olympics.

Their qualification was almost a foregone conclusion and their training for six days in Monaco prior to the Olympics is a catalog of stories and tales. From the nude beaches to dining with royalty the team not only practiced but relaxed and tried to fathom the massive attention that dwarfed that of even a regular NBA final or All Star game. Daly and Jordan played golf during the day, cards at night and still got on with the business of playing to win.

It was during their practice sessions in Monaco that the team split in two and played each other in what Jordan would later describe as the greatest game no one ever saw, and with that line up of players, you can believe it, but if that’s a sight to have seen, nothing compared with what was to come. For a start they weren’t able to stay in the Olympic village for security reasons and they were often surrounded by uzi totting guards, but one of the team just ignored the death threats.

Charles Barkley walked the streets of Barcelona at night without escort and when asked where his body guards were held up his balled fists and said “This is my security” and given his record for punching people you could probably put money on that, if you like to bet on sports in the US, he wouldn’t be a long shot. Unfortunately Barkley would cause a bit of an upset in their first match against Angola with a blatant foul on an opposing player, but victory was never in doubt and the 116-48 scoreline reflects this.

The rest of the tournament was a parade of the NBA stars eclipsing everyone else with victories by 40 points or more in most of their games. With the closest match being the gold medal final against Croatia the USA’s dream team didn’t just win by comfortable margins, they entirely dominated a world wide sporting event from start to finish. Opposing teams were far more interested in meeting their heroes than playing against them and amusing moments abounded as scores mounted against them.

There has never been another sporting team like that 1992 squad. 11 of 12 players elected to the hall of fame, 3 of 4 coaches elected to the hall of fame, it is something that is unlikely to ever be repeated and for those of us that saw those men play in that Olympics we can assure ourselves we saw the best of basketball played by the best of the very best. Dreams don’t often come true, but for the USA in Barcelona they shared one with everybody.

Read more about basketball and betting on it.